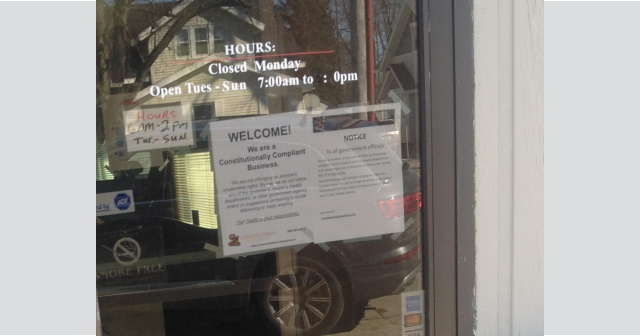 Earlier today, the Michigan Attorney General’s office announced the arrest of Marlena Pavlos-Hackney, owner of Marlena’s Bistro and Pizzeria in Holland, Mich. Her crime? Operating her restaurant in defiance of the state’s COVID-19 orders.

According to an article from Michigan Capitol Confidential, imprisonment has been looming over Hackney's head since March 4, when Attorney General Dana Nessel and the Michigan Department of Agriculture and Rural Development petitioned a court to enforce a shutdown order targeting her restaurant. The department had suspended Hackney's food establishment license in January, according to a press release put out today by the Attorney General’s office announcing the arrest.

Hackney closed her business in March 2020 in compliance with Gov. Gretchen Whitmer’s first set of lockdown orders. She reopened last summer, and when the state issued another restaurant lockdown last fall, Hackney refused to comply. She has told customers that “your health is your responsibility” and has refused to enforce mask mandates, capacity limits or any other state-issued COVID-19 order that would impact her business.

At the March 4 hearing, Ingham County Circuit Judge Wanda Stokes imposed a $7,500 fine, along with a bench warrant for Hackney's arrest. She was advised by the Michigan State Police to turn herself in by March 18. When she failed to do so, she was arrested early in the morning on March 19, following a traffic stop when she was observed driving by local police. She will be held in the county jail until court proceedings can be arranged.

“I am willing to fight,” Hackney told Michigan Capitol Confidential. “I will not be intimidated. Nothing will change. I am going to fight for my freedom.”