Veto puts freedom of speech and voluntary association at risk

Among his final actions as governor of Michigan, Gov. Rick Snyder vetoed 42 bills that were sent to him by the Michigan Legislature. Over the course of the four-week lame duck session, he nixed 60 bills, the vast majority of which were authored by members of his own party.

Others may comment about what the volume of vetoes says about Gov. Snyder’s governing philosophy, internal management or engagement with the legislative process. But his veto of Senate Bill 1176, authored by Sen. Mike Shirkey, merits specific attention for the consequences it could soon have on Michiganders’ freedoms of speech and voluntary association.

Senate Bill 1176 would have codified existing practice and protections for Michiganders who want to express and voluntarily associate with others who share their beliefs. It said that neither state nor local government agencies were allowed to demand or release the personal information of the supporters of nonprofit organizations. Much of this information has long been held to be confidential tax information at the federal level. SB 1176 would have guaranteed that disclosures required under the Michigan campaign finance and lobbying acts, as well as the listing of a nonprofit’s board members on Michigan corporate filings, would continue.

The bill had a broad base of support, including the Mackinac Center, the Michigan and Grand Rapids Chambers, Philanthropy Roundtable, People United for Privacy, the Michigan Home Builders Association, the Michigan Catholic Conference and the American Cancer Society.

Every American has the right to support causes they believe in. Unfortunately, in 21st century political discourse, the definition of controversial has been reduced to “something that someone else disagrees with.” A policy issue or cultural value that may be widely popular within a community, state or even nation can be easily demonized. Powered by social media, digital mobs can quickly escalate disagreements and even inspire threats to individuals’ personal safety, livelihoods and property.

Six decades ago, the state of Alabama sought to compel the National Association for the Advancement of Colored People to produce its membership lists. The intent of the order was to pass those names through to the opponents of the Civil Rights Movement so that they could retaliate against their neighbors who bravely supported that cause. As an example of that motive, a former pastor of mine, who preached in support of the civil rights movement, had to move his family out of Mississippi after his children’s bedroom windows were shot out by the local Ku Klux Klan.

The NAACP challenged the state of Alabama, and a unanimous U.S. Supreme Court ruled that the forced disclosure of nonprofit supporters violated Americans’ constitutional freedoms of speech and assembly. While this ruling protects nonprofits in court, it does not eliminate the threat of similarly motivated actions on the part of those who wish to harass, bully and menace those who have different views and support causes opposite to theirs.

In fact, several states and a growing number of municipalities have passed forced disclosure laws and ordinances, with more states expected to debate such proposals this year. Some of these proposals have been so broad and vague as to encompass communications about pending legislation by 501(c)(3) organizations that do not endorse candidates or engage in election activities, or even an organization’s communications with its own members about proposed laws that affect the organization’s mission.

In Gov. Snyder’s veto letter, he concedes that “other state attorneys general have probed for information relative to nonprofit donors” but “that has not been the case in Michigan.” This is shortsighted: Just because it hasn’t happened here yet doesn’t mean it won’t ever. And the fact that other states and cities are playing loose with these constitutional protections is all the more reason for Michigan to be proactive, pass SB 1176 and protect Michiganders’ rights.

Furthermore, both incoming Secretary of State Jocelyn Benson and Attorney General Dana Nessel have publicly signaled their intentions to force disclosure of donors of 501(c) organizations. Gov. Snyder’s response is that he “believe(s) the Supreme Court’s decision in NAACP v. Alabama effectively prohibits the type of activities that this legislation seeks to prohibit.” However, that judicial precedent has yet to thwart the recent constitutional end runs in states and municipalities across the country. 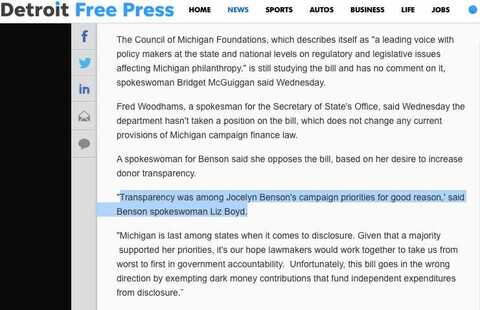 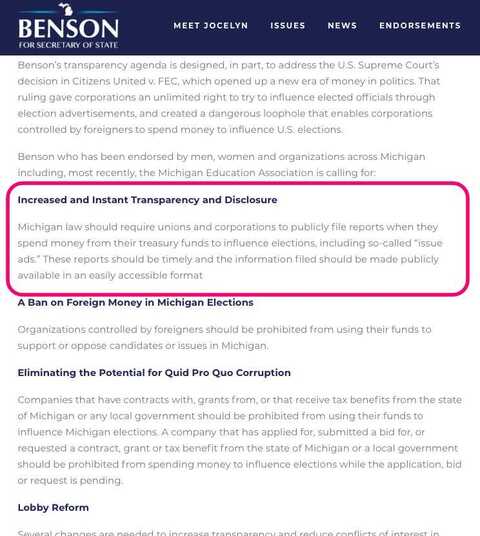 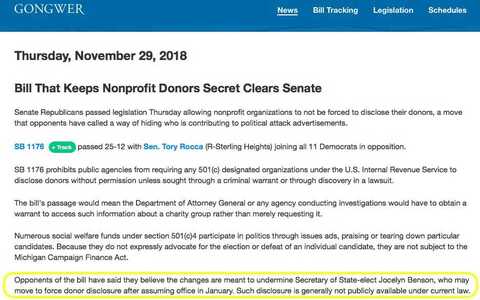 Especially given former Gov. Snyder’s shortsighted veto of SB 1176, the Mackinac Center for Public Policy will remain vigilant and resolute in the defense of all Michiganders’ freedom of speech and voluntary association.

The Right to Protest Should be Protected, Even During the Pandemic