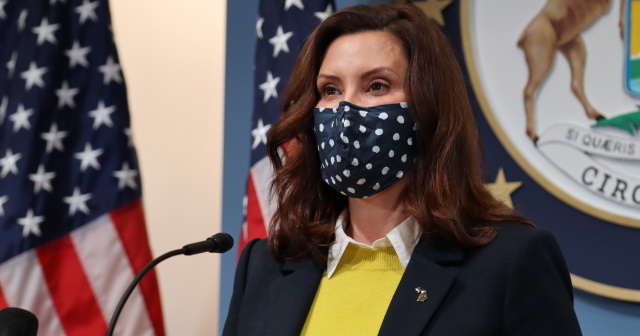 Did Gov. Whitmer’s Holiday ‘Pause to Save Lives’ Work?

Death rate increased more in Michigan than in neighboring states

On Nov. 18, Gov. Gretchen Whitmer and the Michigan state health department put in place some of the most severe restrictions on businesses and individuals in the country at the time. They banned indoor dining, shut down high schools and colleges for in-person classes, closed bowling alleys and movie theaters and even prohibited ice skating and outdoor group exercises.

In Michigan’s neighboring states of Ohio, Indiana and Wisconsin, different restrictions were put in place, but not nearly as severe. Ohio instituted a statewide 10 p.m. to 5 a.m. curfew, and all Midwestern states had indoor mask mandates. But Michigan’s immediate neighbors permitted most of the activities listed above.

The governor and her allies say that shutting down these particular activities saved lives. The head of the state health department at the time, Robert Gordon, noted that two months after the pause began, COVID cases, hospitalizations and deaths in Michigan were trending down. The “pause to save lives” must be the cause, he argued.

Of course, a number of factors could have contributed to these declining trends, especially since COVID cases were starting to decline before “the pause.” But comparing Michigan with nearby states with different COVID policies provides an opportunity to better assess the possible effects of the pause.

The Centers for Disease Control and Prevention collects data on the number of deaths in each state. One category is “all deaths involving COVID-19.” Let’s compare Michigan to its immediate neighbors: Ohio, Indiana and Wisconsin. 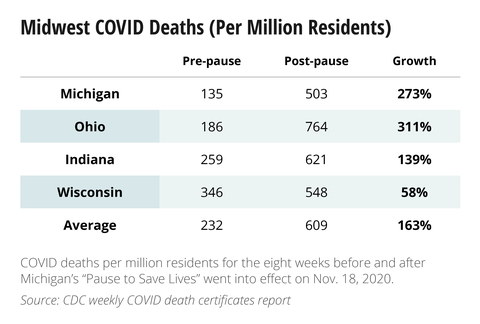 Of course, several factors could have influenced these numbers. Most of them are still probably unknown and will require careful study to understand. But it’s difficult to see how “the pause” was a sure success if COVID deaths in neighboring states with different policies did not increase as much as Michigan’s did.