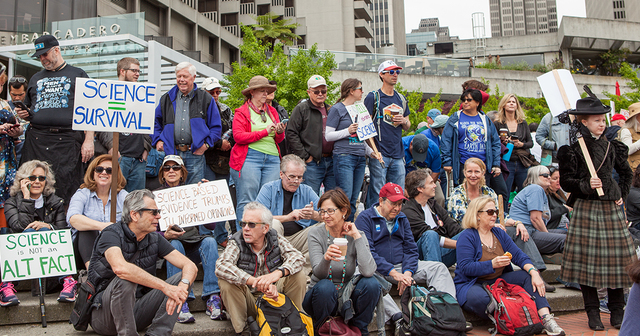 Federal spending bill lets the air out of protestor’s tires

For several weeks, we have been inundated with media reports about thousands of protesters publicly opposing what they feared was the end of science in the United States, and possibly the world.

The March for Science website described how an “unprecedented coalition” gathered together on April 22 – Earth Day – in over 600 separate marches to “defend the role of science in policy and society.”

The Peoples Climate March, held on May 1, said that “more than 300,000 in Washington, D.C. and across the country” banded together to move away from “a cruel, polluted and divided country, and towards a clean energy economy that works for everyone.”

Much of the motivation driving the two widely covered marches was to respond to Trump administration actions aimed at rolling back environmental regulations and questioning the potential long-term impacts of climate change. At the Washington, D.C. March for Science event, Bill Nye, “the Science Guy,” charged elected officials worldwide with “deliberately ignoring and actively surpassing science.”

Few would question the intensity of the marcher’s feelings. But when the final congressional spending bill was rolled out on May 1, much of the frenzied wailing, brought on by proposed cuts to science- and climate-focused federal agencies, proved to be much ado about nothing.

There’s no question that the EPA could endure a much larger budget cut in 2017. As I recently asked a Bridge Magazine reporter, “Honestly, is there any government agency that can’t cut somewhere?” After all, the EPA actually classified a mere 1,069 out of its 16,205 employees as essential during the 2013 federal government shutdown. So asking department officials to struggle through with an $8.06 billion budget in 2017 — compared to the $8.2 billion they received in 2016 — is not imposing a serious hardship.

A few additional examples will show how science avoided any serious funding restrictions in this spending bill.

After all the marching, chanting, and forecasts of doom, Congress was actually quite generous to science and climate research. In fact, this spending bill effectively let all the air out of all the tires on all the buses that were hired to ship worried protesters around the country.

Given the fact that elected officials across the political spectrum rushed out to take bipartisan credit for spending another $1.1 trillion in 2017, the only thing seriously at risk from this year’s omnibus spending bill is the American taxpayer.