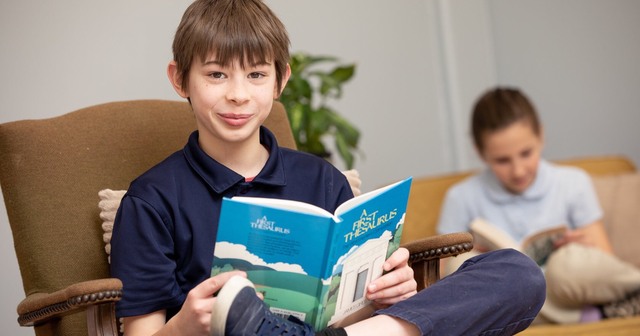 Classical Charter Schools on the Rise in Michigan

Having operated in Michigan for more than 25 years, public charter schools regularly have to overcome myths about how they function. That’s even truer of charters that provide classical education, a newer phenomenon that could soon reach more parts of the state.

The hope of what classical education can look like in Michigan charter schools has quickly taken shape near the western edge of Wayne County. Ivywood Classical Academy was one of three Michigan charters to open for the first time last fall, marked by a unique set of partnerships that may form a blueprint for aspiring school founders to follow.

Ivywood serves about 130 students in grades K-5, with plans to grow by leaps and bounds in the next school year. Principal Stephanie Kooiker often gets to provide a pleasant surprise to many parents and grandparents of prospective pupils as she shows off the new school.

“When people come to us to tour, one of the most frequently asked questions is, ‘What’s your tuition?’” Kooiker said. “And many of them are just astounded when we tell them there isn’t any.” All charter schools are tuition-free and can't discriminate in their admissions.

But the misconception the principal hears comes from the common assumption that classical learning occurs only in private institutions. Ivywood is also closely affiliated with Hillsdale College, a private liberal arts college known for its rigorous academics and refusal to accept government funding.

Through Hillsdale College and its Barney Charter School Initiative, Ivywood teachers receive coaching and mentoring to deliver the curriculum. “Classical charter schools are the best deal in education today,” said Kathleen O’Toole, Hillsdale’s assistant provost for K-12 education. “The students in the schools are going back to the way that education used to be done in this country.”

Starting in kindergarten, students in Ivywood and its sister schools learn English language arts through phonics, and they memorize math facts. They also are exposed to great literature and a systematic emphasis on character education. “Our seven core virtues, we embed them into our curriculum. We reference them in history, in math, in art, continuously throughout the year,” Kooiker said.

Ivywood’s principal moved from Florida to Michigan in 2016 to work at the state’s first Barney charter school. To get off the ground, Livingston Classical Academy took the unusual step of partnering with a local school district, Whitmore Lake Public Schools, as its authorizer.

A devoted team of volunteer founders at Ivywood persevered through their own struggles to open the school’s doors to students. They got a late start on enrollments because of delays in securing a building, a converted AT&T training center in Plymouth.

“I think it’s an unbelievable challenge, but the fruits of the labor are completely worth it,” said Tyler Horning, Ivywood co-founder and board president. “If you have a team of people that share a common vision and a common mission, and if you can surround yourself with a group like that, this dream is attainable.”

The new school has been able to hit the ground running, thanks to a first-of-its-kind cooperative arrangement between the Barney Initiative and Choice Schools Associates, a charter management company that has assisted the school’s founders by taking on the operational reins. Ivywood also benefits from its relationship with Central Michigan University, one of the state’s largest and most established charter school authorizers.

“Ivywood Classical Academy is another great example of a charter public school being born from community members identifying an educational need and then recognizing that they have the power to address it,” said Corey Northrop, executive director of The Governor John Engler Center for Charter Schools at CMU. “The school’s founding board members wanted to offer what is typically only provided in private institutions [but] in a public school setting.”

Ivywood’s continued success may inspire other would-be founders to offer more families the option of a charter-based classical education. According to O’Toole, Hillsdale’s team is conferring with three other potential founding groups around Michigan. Currently, there are about two dozen Barney charter schools in 11 different states.

“They’re in every type of community you can imagine,” she said. “We've got suburban schools, and we've got schools that serve economically disadvantaged kids.” For example, most of the students receiving a classical education in western New Mexico’s Hozho Academy hail from the nearby Navajo Nation.

Meanwhile, Hillsdale leaders have high hopes for Michigan’s new school. “I expect that they will continue to thrive. They've got a good situation in place. They've got a beautiful building, a team of teachers who are talented and really driven,” O’Toole said. “And as far as we can tell, they've had an excellent first year.”