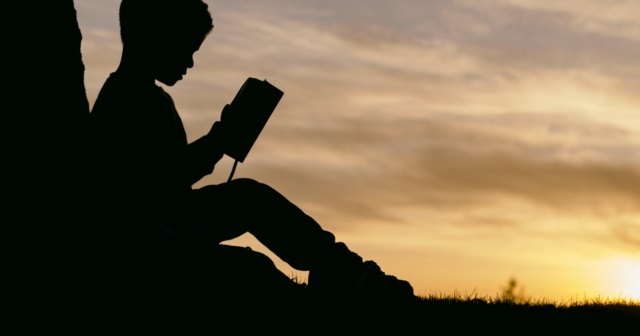 Lawmakers should narrow the funding gap between charter and district schools

A recent story from Crain’s Detroit Business on the “arithmetic of inequality” in Michigan K-12 funding erred in boosting a broad solution based on a narrow comparison. Correcting its omission of key schools and funding sources highlights where the true disparities lie.

The article singles out 43 of the state’s 537 conventional school districts. These “hold-harmless” districts retain higher local property tax rates 25 years after Proposal A shifted the school funding burden to state taxpayers. That shift closed the once vast fiscal gap between Michigan’s highest- and lowest-funded public schools, but not completely.

The Crain’s article expressed concerns that the state gives hold-harmless districts more funding to benefit more privileged students, instead of effectively targeting money to poorer students who often need more support to succeed at school. This is a valid concern, of course. Those 43 districts serve a slightly better off population than the state average: 39% of their students receive federally subsidized meals based on their household income, compared to an average of 48% in the rest of the conventional school districts.

While the foundation allowance represents the single biggest source of K-12 cash, it does not account for billions of dollars in public school revenues each year. The omission enables the story to repeat a debunked claim that former Gov. Rick Snyder cut public school funding by $470 per student in his first year in office.

To compare whether districts are being funded fairly requires a look at all the money they receive, not just through one funding mechanism. Included in the many overlooked funding sources is more than $500 million the state hands out each year in “at-risk funding,” which districts receive based on the number of low-income students they serve. Nearly a billion dollars in federal funds pay for meals and extra educational services for districts serving low-income student populations.

Taking all revenues into account, the typical hold-harmless district collects about $2,000, or 15%, more per student than its peers statewide, even though their rate of economically disadvantaged students is lower.

That’s a sizable difference, but it is not the largest funding gap between different types of public schools in Michigan. A much steeper difference can be found between conventional districts and the state’s charter schools, where 75% of students are economically disadvantaged. In 2019, for every three dollars charter schools received per student, districts collected four. 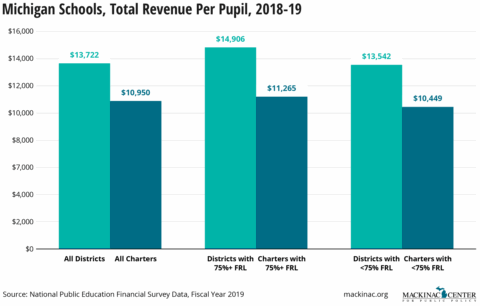 Comparing district schools with similar demographics to charters reveals an even starker divide. Michigan’s 63 districts with 75% or greater low-income enrollments (including five hold-harmless districts) received about $14,900 per pupil, nearly one-third more than the $11,200 per student taken in by the state’s 170 charters with the same criteria. The rest of the charter schools serving populations where less than 75% of the students are low-income averaged receiving about $10,500 per pupil. That’s $3,000 less than the average for districts that meeting the same criteria.

Putting a magnifying glass on hold-harmless districts, and counting only foundation allowance dollars, generates an incomplete and faulty fiscal picture. Districts that enroll additional disadvantaged students tend to bring in more money. The short end of the stick goes to charters, which get less money yet serve more low-income students. Comparing charters to the more affluent hold-harmless districts yields the largest disparity of all: a 42% disadvantage in total per-pupil revenue.

Policymakers should keep closing the foundation allowance gap to continue reducing the remaining disparity between hold-harmless districts and all other schools. But a more significant way to make education funding in Michigan fairer would be to tie more money directly to students and fund them consistently based on their characteristics. That would narrow the more significant funding gap between charter and district schools.