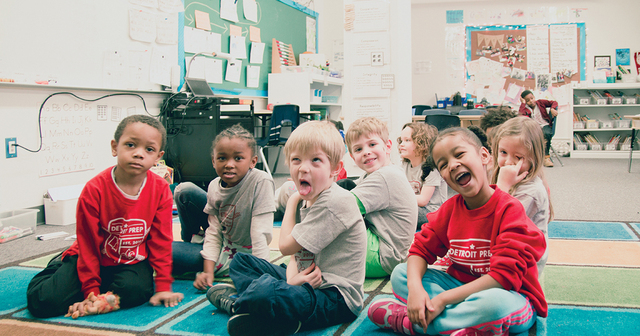 A recent Michigan Radio headline sounded the alarm: "Study gives low grades to Michigan charter schools on diversity." But a closer look at the study from the left-leaning Century Foundation removes most of the concern about our state's choice-driven, independent public schools.

It's a noble sentiment to want public charter schools to significantly alter the way people have self-sorted within our larger residentially based education system. As one national researcher argued: "America is inexcusably segregated today, but it is ridiculous to imply that charter schools are to blame."

The Century Foundation's dissimilarity index doesn't put all the blame on charter schools, but does expect them to do more to reduce the racial imbalances in surrounding districts. The expectation is daunting, as most charters and other public schools cannot easily draw students from across a large geographic area. They nonetheless found charter schools in one of Michigan's five most populous counties, Kent County, help counteract the greater levels of segregation found in conventional schools.

On the other side of the state, Wayne County district schools alone would need 62 percent of either white or minority students to transfer to other schools to achieve a perfect balance of integration. Add in charters, which serve nearly one-third of the county's public school students, and that rate ticks up to nearly 69 percent. Charter schools clearly have a small bearing on the overall picture.

Importantly, public charter schools operate only if parents choose them; they cannot discriminate in their enrollment policies. Of course, the Century Foundation is aware of this fact, because they credit Michigan for requiring all charters to have open admissions policies.

But that same requirement is not necessarily applied to conventional school districts. Local boards of education in Michigan can set up selective admission magnet schools, refuse to accept students who live outside their boundaries and even charge nonresidents lofty tuition rates.

That’s not the only area the Century Foundation unfairly reviews the performance of Michigan’s charter schools. They also mark down Michigan charters for not giving low-income families extra preference in the lotteries held to determine which applicants can enroll in the limited number of available seats. They ding charters, yet three out of four Michigan charter students already come from low-income families. That's because charters tend to locate in areas where there is the most demand for alternatives to the traditional school district option. This tends to be in places where poverty is rife.

The study's broader slate of policy solutions doesn't match up well with the outcomes they seek to promote. In fact, using the report's methods and scores, a state that adheres to what they describe as "the key policies that support integration in charter schools" is actually less likely to improve integration. Only one state in their top-10 policy ranking also finished in the top 10 for increasing diversity: California.

The first of the Century Foundation's three heavy-handed recommendations for Michigan to promote integration in charter schools would at best have little effect. The report's authors want charters to prove they have established a satisfactory "diversity outreach" program before having their contracts approved or renewed. Nothing precludes Michigan charter schools from making ethnic diversity or cultural awareness points of emphasis with students and parents — and a good number of them do this already voluntarily. It shouldn't be imposed on them.

Parents exercise educational choice for a host of different reasons, but finding a school that has significantly more racial and economic diversity is not a high priority for most. In a 2018 Mackinac Center survey, hundreds of Michigan charter school parents rated the level of diversity 14th most important out of 20 factors for deciding to choose a new school. Diversity ranked ahead of sports programs and afterschool care, but well behind academic quality, safety, teacher quality and technology.

It isn't clear how much impact the second recommendation would have: "More Michigan charter schools should enroll students from multiple school districts to promote integration across a region." Eighty-five percent of the state's charters are already legally obligated to accept students from anywhere in the state. Mandating that charters give preference to certain prospective students based on where they live would have the odd effect of requiring charter schools to start discriminating against certain parents and students who want to enroll in the school but don’t live in the preferred area.

The final recommendation for Michigan correctly addresses the issue of transportation. Giving charter schools extra dollars to meet a new transportation requirement would bring them closer to funding parity with conventional districts, which are not legally bound to provide bus service either. Instead of a new mandate, though, student transportation scholarships for public transit, ridesharing or other conveyances offer a more effective approach to leveling the playing field.

There are ways to give more families of all races and income levels the ability to access needed education options, and they involve providing parents with more freedom to choose the school that works best for them and their children.