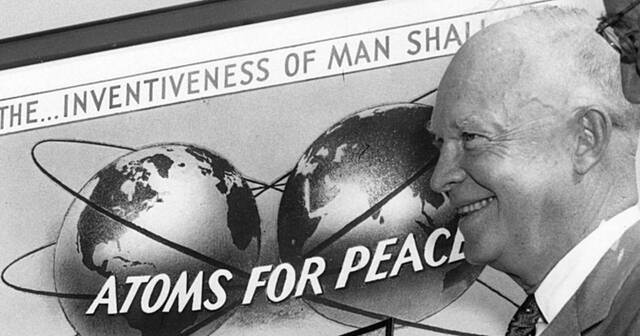 Can Atoms for Peace be turned into weapons for war?

Nuclear weapons have not been used in anger since 1945, but the fear that nuclear technology would lead to humanity's downfall has had a very long half-life.

Nuclear technology's most significant advantage turned out to be as a tool of peace: a power source with almost no CO2 emissions, safe working conditions, plentiful fuel, compact waste, and massive energy output.

Yet nuclear power never lost its public association with mass destruction. For many who oppose nuclear power, nuclear war and nuclear energy are almost indistinguishable.

The Union of Concerned Scientists, a nonprofit advocacy group, takes a similar view. “UCS opposes reprocessing because it increases proliferation and terrorism risks,” the organization says on its website.

While understandable, these fears are unfounded.

Safeguards against proliferation are strong, and the International Atomic Energy Agency undertakes regular inspections and audits of nuclear plants to track the movement of nuclear material. The IAEA does inspections both under the requirements of the Non-Proliferation Treaty and “Additional Protocol” with countries to ensure the safeguarding of nuclear materials. Since the adoption of the NPT in 1970, no fissile materials have been illegally turned into weapons.

“Civil nuclear power has not been the cause of or route to nuclear weapons in any country that has nuclear weapons, and no uranium traded for electricity production has ever been diverted for military use,” the World Nuclear Association says in it's “Safeguards to Prevent Nuclear Proliferation.”

The Association explains that while there is a potential concern for some nations (Iran, for example) to develop an enrichment or reprocessing facility and attempt to use it for weapons development, it goes on to say that “[t]here is no chance that the resurgent problem of nuclear weapons proliferation will be solved by turning away from nuclear power.”

The obstacles faced by those seeking to steal nuclear materials for use in terror activities are significant and nearly insurmountable. First, nuclear storage facilities are highly secure facilities under surveillance by armed guards. Beyond that, the storage casks are filled with radioactive materials, requiring protective gear and knowledge of how to use it. Then the casks themselves weigh over 100 tons and require special equipment to move them.

But assuming a group could overwhelm security, survive the radiation, and move a nearly immovable cask, it would still face the challenge of enriching that spent fuel to weapons-grade  — a task that is beyond the capacity of most nations, let alone individuals. “Few countries possess the technological knowledge or the facilities” for weapons-grade enrichment, the World Nuclear Association says.

Additional concerns focus on the potential for terrorists flying a plane into a nuclear facility. The US Electric Power Research Institute undertook a study to see if hitting a plant with a “fully-fueled Boeing 767-400 of over 200 tonnes… at 560 km/h…” would be able to do serious damage. The result? “In each case no part of the aircraft or its fuel would penetrate the containment,” according to the World Nuclear Association.

In another study, a plane was flown into a test wall of concrete 3.6 meters thick. “The plane, including its fuel tanks, collapsed against the outside of the wall, penetrating a few centimeters,” the journal Science reported in 2002. “The engines were a better penetrator, but still dug in only 5 cm… inside the containment wall are additional walls of concrete and steel protecting the reactor.”

Concerns about the safety of nuclear power are reasonable and have been capably addressed. It is simply the case that current nuclear power stands up to this scrutiny.

Nuclear Defense: Why Nuclear Energy is Safer Than You Think (Part 1)