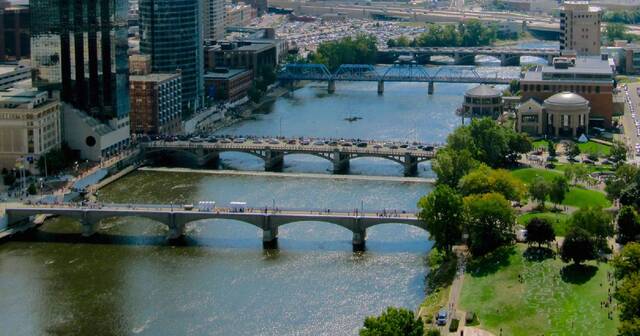 Grand Rapids-Wyoming ranks third among Michigan’s 14 metro areas in a new index of economic freedom, suggesting a bullish future for the region’s business and employment growth.

To conduct our study, we collected data regarding every Metropolitan Statistical Area in the United States — 383 in all — covering three major policy areas: labor markets, taxes and government spending. The index also includes several vital measures such as union influence, minimum wage burdens and government employment. Each area received an objective score from 0 to 10.

We divided all 383 MSAs into four equal groups depending on their scores in those areas. Repeatedly we found that those in the higher-scoring groups did better on important outcomes. We found that metro areas in the highest group had 2.5 times faster employment growth than those in the lowest group. Florida was home to eight of the top 10 freedom scores among MSAs across the United States.

Midland performed best within the state, with a score of 6.76, slightly above the national average of 6.75. Ann Arbor was second at 6.66 and Grand Rapids-Wyoming was third with a score of 6.56. These MSAs performed well in each area of the index. The worst scores in Michigan were from Bay City, Flint and Battle Creek, respectively.

Our study also dug into each area of the overall index and ranked it independently. Consider one area: labor market regulation. Nationwide, we found that metropolitan statistical areas with the lowest labor market freedom scores had an average unemployment rate that was 33% higher than those with the highest scores.

Within Michigan, the Ann Arbor and Grand Rapids-Wyoming areas performed best, with a 2017 unemployment rate of just 3.5%. Only four Michigan MSAs had a lower rate than the national average. If you look at labor market freedom and employment growth instead (from 2017-2019), two of the three Michigan MSAs with the highest scores (again, Ann Arbor and Grand Rapids-Wyoming) also did the best, with robust growth at 3.2% and 2.8%, respectively.

There are similar associations in another area we singled out: state and local government employees as a percentage of total employment. Bay City performs worst in this category, with 12.4% of its workers holding public jobs. The city’s 2017 unemployment rate was 5.5%. By contrast, Grand Rapids-Wyoming and Ann Arbor were tied at 5.2% for the lowest percentages of government employees, and both had the state’s lowest unemployment rates.

None of these important associations is likely to be a matter of coincidence. Studies using a similar methodology have been used to examine U.S. and Mexican states and Canadian provinces, nations of the world, and even the Arab nation economies. In the most recent of these studies Michigan is ranked 34th among the 50 states in economic freedom.

One study published in 2020 found that for every 10% improvement in a state’s freedom score (from 6 to 6.6, for example) there was a corresponding 28% increase in the rate of gross in-migration. A migration study that divided metropolitan statistical areas into three groups found that from 2011 through 2015 states with the top scores added 1 million people on net balance, while the two lower-scoring groups lost roughly the same number.

What does all of this mean? Opportunity. Policymakers who want more of it for the people who elect them must practice restraint in tax, spending and labor policy. Economic liberty is associated with better outcomes.

Other states and local areas tend to do better than most Michigan metropolitan areas because their policies accommodate rather than restrict economic freedom.

Michael LaFaive is senior director of fiscal policy at Midland-based Mackinac Center for Public Policy. Dean Stansel, Ph.D., is an economist at the Bridwell Institute for Economic Freedom in SMU’s Cox School of Business in Dallas.