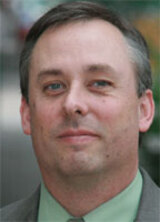 Michael Jahr works for a private philanthropic foundation, having earlier served as the Center's vice president for communications, a post he was promoted to in February 2011. He worked at the Center for approximately seven years.

Jahr joined the Center’s staff in September 2005 as a communications specialist after 10 years in Washington, D.C., as communications director for a member of Congress. In that capacity, he served as the congressman’s spokesman and wrote Op-Eds, press releases and speeches. Prior to that, Jahr worked for a variety of media outlets, including National Geographic, The Ann Arbor News and a newswire covering the Middle East.

Jahr's work for the Center has appeared in The Wall Street Journal, The Weekly Standard, The Detroit News and other news outlets. Jahr holds a degree in journalism from Eastern Michigan University.

Pennies on the Dollar

Detroit Could Sell Off Assets to Avoid Insolvency

Why We Shouldn't Revile Success

Reasons to Celebrate in Michigan

The Union, Not Day Care Providers, Is Getting the ‘Pay Cut’

Deals and Myths for Christmas