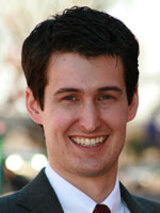 Justin W. Marshall is director of annual and special gifts at Northwood University in Midland, Mich., and he previously served as vice president for advancement for the Mackinac Center for Public Policy. Marshall started at the Center in 2002 as a fiscal policy researcher, but switched portfolios to join the Center’s advancement department full time in 2003. He served as the Center’s membership development officer until 2006 and as director of advancement from 2006 to 2008.

Before working at the Center, Marshall helped coordinate events for the Olympic Torch Relay in the run-up to the 2002 Winter Olympic Games in Salt Lake City. He has traveled widely, visiting France, Belgium, the Netherlands, Germany, Greece, Italy, Switzerland, Turkey, South Korea, Mexico and New Zealand. He is a lifelong fan of the Detroit Pistons and enjoys tennis, cycling, landscaping and time outdoors with his dog, Kona.

Marshall lives in Midland, Mich., and is a native of Holly, Mich.

The Science of Changing the Future

Incentives Matter, at Any Age

Greeley and Bobsy: Wellsprings of Freedom