"Right or wrong, sing out!"

Dr. Dale Haywood would often give his students this advice, which he’d heard from a music instructor, to encourage class participation and intellectual discovery.

Dr. Haywood taught philosophy and economics, but by making his pupils develop the habit of "singing out," he knew they could learn from their mistakes, helping to ensure a flawless "concert performance" in the future. College, he believed, was a transitional period in which students could test themselves and what they believed before they set out to give some of the biggest performances of their lives. 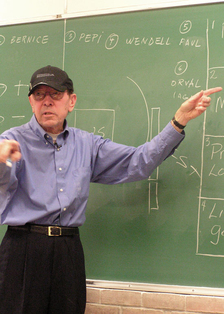 His own "concert hall" was Northwood University, and he was its maestro. Northwood is proud to teach the merits of free-market capitalism and the importance of freedom, and he personified the university’s mission.

In addition to many other courses, he taught a freshman level class, "Introduction to Philosophy," where he acquainted many students, including me, with the importance of personal responsibility, liberty and morality. His teaching methods were innovative, and his genius was evident in his ability to make complex ideas accessible to a broad audience. One example was his "12-cell matrix," a tool he developed to explain to students the concepts of private property, the free market, the profit-and-loss system and limited government.

His passion for freedom didn’t end outside the classroom. Whether in the cafeteria, the commons or his office, he was always open to debate, and he encouraged students to challenge what he taught in his classes.

On a few occasions, I took him up on his offer. I am forced to admit that I usually lost the debates, but in the end, I became more impressed with his logic and intellect. I also became a stronger student.

As befits a true instructor, he wanted to create a stronger student. I would assume, though I never asked him, that Dr. Haywood would have enjoyed giving A’s to everyone — if they deserved it. He didn’t use a curve or any type of grade inflation. He just gave an objective assessment of a student’s work and his or her corresponding letter grade. He would not give up on students, even if they gave up on him, and as a result, his passion for teaching has created a network of young men and women who continue to champion effectively the causes and ideas that he, like America’s Founders, cherished.

Just as I consider many of our country’s Founders to be heroes, I consider Dr. Haywood to be one, too. Let me try to explain that view, because "hero" is a word that can be cheapened by overuse.

When we were children, many of our heroes were make-believe. They could fly or "leap tall buildings in a single bound." Dr. Haywood was not a hero in that sense.

Yet it is the existence of the freedoms in this country that Dr. Haywood so aggressively defended and promoted that gave the Wright brothers the opportunity to develop the first airplane, and each of us the chance to fly. Such freedom is the foundation that liberates human capital to realize humanity’s greatest achievements.

Defending something so fragile and precious is heroic.

Dr. Haywood possessed another heroic trait necessary for freedom’s survival — courage. For many people, the hardest thing in the world is to do what they want. For him, it wasn’t. Despite numerous critics and obstacles, Dr. Haywood courageously defended freedom, and he stood as a pillar of intellectual strength right through his final days.

His passing is not the end of a story, but the beginning of a new chapter. Dr. Haywood’s legacy of freedom will be carried forth by me and by the thousands of other students he’s taught — and in the end, liberty will prevail.

Dr. Haywood understood that the things we want most in life, such as freedom and joy, are attained only when we give them freely to others. I will miss Dr. Haywood, but I will always remember him for his profound impact on my life and on the direction it took after college. He is one of the greatest single reasons why I believe today so strongly in freedom and in the market system.

I hope that in some way, these reflections on a master conductor will bring comfort to his family as they deal with the loss of a great man.

Justin W. Marshall is Director of Advancement for the Mackinac Center for Public Policy, a research and educational institute headquartered in Midland, Mich. Permission to reprint in whole or in part is hereby granted, provided that the author and the Center are properly cited.