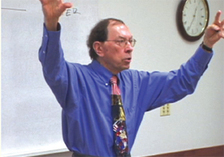 This article first appeared in the Fall 2006 issue of Impact.

Dr. Dale M. Haywood was a respected economist, an influential teacher and a man who possessed an unshakeable belief in the principles of liberty. He passed away on Sept. 5 after a lengthy illness.

Dr. Haywood was one of the first academics to join the forerunner to today’s Mackinac Center Board of Scholars in 1988. He served until his passing. He and his wife, Marcia, have been steadfast contributors since the early 1990s.

Perhaps his greatest contribution to the understanding and appreciation of free markets was as teacher to thousands of students who passed through his Northwood University classrooms in Michigan and Texas. When he recently retired from Northwood after 40 years of teaching economics and philosophy, the university heralded him as an “economic icon.”

An online memorial contains more than 200 notes from former students, colleagues and friends who testify to Dr. Haywood’s impact and how he strengthened, or sparked for the first time, their understanding of the market system and the benefits of limited government.

Three Mackinac Center staff members are among Dr. Haywood’s students. James Hohman, fiscal policy research assistant, is the newest Mackinac Center employee. Director of Operations Patricia J. Benner recalls Dr. Haywood’s “unbridled enthusiasm for his students, his work and his life.” Director of Advancement Justin W. Marshall wrote in a tribute, “He is one of the greatest single reasons why I believe today so strongly in freedom and in the market system.”

Mackinac Center President Lawrence W. Reed chaired Northwood’s economics department in the early 1980s and knew Dr. Haywood well. “Dale Haywood stood his ground on matters of principle, but made friends easily with people of every persuasion. He was passionate about liberty and concerned about its erosion. He was one of the most colorful and memorable speakers the classroom ever produced.”

Justin W. Marshall is Director of Advancement for the Mackinac Center for Public Policy, a research and educational institute headquartered in Midland, Mich. Permission to reprint in whole or in part is hereby granted, provided that the author and the Center are properly cited.