It Shouldn’t Take a Superhero to Fix Public Education 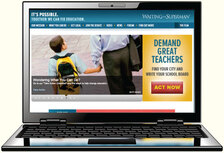 The website for “Waiting for Superman” offers not just a critique of public education, but ways to get involved and work to better it.

In the documentary "Waiting for Superman," director Davis Guggenheim takes us on a tour of public schools and asks why we are failing to educate so many of our children, especially those from poor inner city areas. In the end, Guggenheim identifies two problems. The first is the conflicting agendas of federal, state and local authorities and the torturous bureaucracy they combine to create. The second is teachers unions that manipulate collective bargaining and politics to stifle reforms and protect blatantly incompetent members.

The National Education Association and American Federation of Teachers both insist upon treating teachers like assembly-line workers who are largely interchangeable, rather than as professionals engaged in a challenging craft.

The latter problem puts progressives and other supporters of traditional public schools in an awful bind. Public schools, as inculcators of common values and a means to help children develop their minds and advance in society, are near and dear to their hearts. But then again so are unions, who supposedly are needed to protect teachers from the twin evils of politicized school boards and the ravages of the marketplace.

Guggenheim, who previously had directed "An Inconvenient Truth" on the subject of global warming, has now picked a fight with the unions. Naturally, he feels conflicted. In an interview on the A.V. Club website, he says: "I'm a Democrat, and I believe, I really believe in unions. I'm a member of a good union." But then he turns to talk about the teachers unions: "And they do call the shots...And that's why everything is so buttoned up. School day ends at 3, principal can't visit the classroom, can't fire a teacher, can't reward another good teacher. The contracts are more than 200 pages long and they control everything."

That they do. New York's teachers are so difficult to fire that the worst are sent to "rubber rooms" where they spend their time playing cards and reading as they wait for their cases to be adjudicated. In Detroit — an even more spectacular academic flameout that Guggenheim unfortunately doesn't get around to profiling — the contract gives union officials input on curriculum and grades.

But as Guggenheim himself observes, many of the obstacles that impede public education in the largest cities also affect schools in the suburbs. That includes interference by teachers unions, though things are not as far along; Superman recounts how school officials in Washington, D.C., have to follow 23 steps to fire a bad teacher. In Adrian, Mich., for example, the process is only 13 steps, but of those only five of those are mandated by the state's teacher tenure law. At least another half-dozen are creations of the collective bargaining agreement.

One thing that education reformers from both the left and the right have in common is the recognition that teaching is a profession and a demanding one at that. It's certainly not a simple, repetitive job that can be done half-awake. It demands intelligence, concentration and a certain amount of creativity. There will be excellent teachers and adequate teachers, and there will be bright people out there who for whatever reason just don't have what it takes to be effective in front of a classroom.

Treating teachers like professionals means rewarding excellence, encouraging the competent to improve, and easing the inept out of the classroom and into some other line of work. For the teachers unions there are no bad teachers, or excellent ones for that matter, there is only adequate. The National Education Association and American Federation of Teachers both insist upon treating teachers like assembly-line workers who are largely interchangeable, rather than as professionals engaged in a challenging craft. Any meaningful improvement of public education will require that at some point we treat teachers as professionals again, and that will inevitably run into resistance from teachers unions.

It doesn't matter if the change is a market-inspired system of incentives, like tuition tax credits, or a more modest one that seeks to restore the traditional public school system, like tenure reform and merit pay. If control of public schools is to be retaken from the unions, it will be essential that reformers, both tea-partiers and progressives like Guggenheim, recognize their common adversary and unite around an agenda that returns professionalism to teaching.