Oakland County Gives Local Governments Something to Shoot For 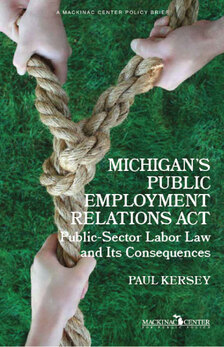 The government employee unions created by PERA may be the single largest obstacle to restoring the state’s prosperity. The repeal or restructuring of PERA could resolve the state’s chronic fiscal crisis. Read more about this at www.mackinac.org/10911.

Michigan's Public Employment Relations Act, the 40-year-old law that governs local government labor relations, puts local officials in a bind and places increasingly unjustifiable burdens on taxpayers. It does this by inadvertently giving government employee union officials an effective veto power over many areas of policymaking and by simultaneously creating a permanent, government-funded lobby for big government. But it is possible for local governments to enact responsible budgets and administer themselves efficiently — if local officials are able to present a united front and throw out all the standard misconceptions regarding collective bargaining.

For an example of what responsible government subject to PERA looks like, consider the example of Oakland County. A combination of solid leadership, keen legal strategy and an electorate that by and large remains fiscally conservative has produced a county government with balanced books, manageable future obligations and a reasonably strong economy in spite of its proximity to the imploding city of Detroit.

One very common mistake that Oakland County has managed to avoid is that of guaranteeing unions a permanent revenue stream. With the exception of the sheriff's office, Oakland County employees are not forced to pay union dues as a term of employment. Oakland County's determination not to underwrite union politics makes unions more accountable to their members and limits the power of the union political machine. If agency fees were in place, government employee unions would take in tens of thousands of dollars more than they currently do, money that could easily be diverted to political campaigns and lobbying. Instead, unions in Oakland County are obliged to seek voluntary contributions from employees who have the power to say no. According to Deputy County Executive Robert Daddow, about half of the workers who have the choice opt to sign up.

On the whole, Oakland County's financial position is less dire than those of neighboring Macomb and Wayne counties. A good general indicator of a county's overall fiscal health is its level of unrestricted net assets, which can generally be used at the discretion of county leaders. While Oakland County's unrestricted net assets have declined, they remain positive, meaning their assets cover their expected costs of government and have some money left to meet additional needs. Meanwhile, Wayne and Macomb counties don't have that luxury. They have unrestricted governmental net asset deficits.

Though all is not sunshine and daisies in Oakland County, the county's fiscal prudence and smart labor relations have benefitted its residents. Given its location in a struggling state in the midst of a recession, Oakland has managed to maintain relatively low unemployment and respectable per-capita income growth.

Not every local government in the state will be able to follow Oakland County's example immediately. Restraining unions in the wake of PERA requires a strong political consensus that is hard to achieve under the best of circumstances. Unions that have successfully used the combination of forced dues and bargaining leverage to become powerful will be especially hard to dislodge. Reform or repeal of PERA will be needed to restore local control and fiscal sustainability. But in the meantime, Oakland provides a good example of smart labor relations for local officials to emulate.

Paul Kersey is director of labor relations and James Hohman is a fiscal policy analyst at the Mackinac Center for Public Policy, a research and educational institute headquartered in Midland, Mich. Permission to reprint in whole or in part is hereby granted, provided that the author and the Center are properly cited.