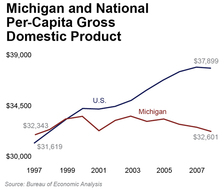 2009 was a bad year for Michigan, but our elected officials seem to think it was just fine. Unwilling to cut excess state spending and free Michigan's economy from its state-imposed shackles, our lawmakers have practically guaranteed there is worse to come — unless Michigan residents demand otherwise.

This year was marked by a steady descent from bad to worse. In November, unemployment stood at 15.1 percent, leading the nation for the 44th consecutive month. Michigan's unemployment rate was higher than Puerto Rico's in two different months this year — something that hasn't happened to any state since data collection began in 1976. Detroit and Flint saw unemployment levels approaching 30 percent.

Michigan policymakers — and residents — need to realize that we can’t keep doing the same thing and expect different results.

In the past 10 years, Michigan dropped from 16th in state economic output to 41st. During the same period, our per-capita personal income — probably the best measure of a state's wealth — tumbled from 17th to 37th. It now stands 13.1 percent below the national average.

Housing values have plummeted; foreclosures have skyrocketed; businesses have failed; and by one well-known measure, people are moving out of the state twice as fast as they're moving in. It does not appear that the millions of dollars state government spends on TV ads touting "the Michigan advantage" are fooling anyone.

Yet the politicians fiddle.

Throughout the year, businesses, workers and homeowners struggling with an anemic economy, an unnecessary tax burden and capricious regulations pleaded for relief. But the same legislators, who are extremely innovative when it comes to "revenue enhancements" — on one September day alone, 25 tax-hike bills were introduced in the Legislature — couldn't find a way to improve the economic climate.

While bad public policy didn't create all of Michigan's problems, we can't fix them without better policy. No single change will be enough. Mackinac Center analysts have recommended hundreds of ideas, large and small, adding up to billions of dollars in state savings and economic growth.

But a bold stroke in 2010 is also necessary to offset the state's image as a poor place to invest. Here are some examples that would send the right signal:

If lawmakers want to start with a half-step toward one of these bold strokes, they could:

If it appears that many of these bold strokes are related to unions, there's a reason. The major obstacle to fiscally sound reforms in Michigan is often a law that favors unions or their political power. Until our elected officials address this fact, other reforms will have less impact.

Michigan policymakers — and residents — need to realize that we can't keep doing the same thing and expect different results. Especially after the economic disasters of the past few years, we need to convince people that Michigan is one of the nation's better places to live and prosper. That's a tough goal, but anything less is unlikely to succeed.

Joseph G. Lehman is president and Michael D. Jahr is director of communications at the Mackinac Center for Public Policy, a research and educational institute headquartered in Midland, Mich. Permission to reprint in whole or in part is hereby granted, provided that the authors and the Center are properly cited.