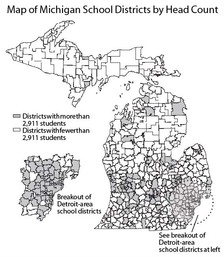 Source: Based on data from the Center for Educational Performance & Information.

For two years now, Gov. Jennifer Granholm has advocated economies of scale as a way of controlling spending in public schools. Last year, she asked legislators for the power to forcibly consolidate school districts. This year, she wants to pressure districts into consolidating their purchasing and support services. Based on a newly released study I undertook for the Mackinac Center for Public Policy, she is betting on the wrong horse.

The assumptions underlying Gov. Granholm’s proposals are that size matters and that bigger is better. Those aren’t unreasonable assumptions. Certainly in many other fields we do see economies of scale. One striking example is Wal-Mart, which has the buying power of a medium-sized nation. As a result, it can negotiate lower prices for the products it stocks and can streamline its worldwide distribution system to economize still further. Whatever one’s personal feelings about the mega-retailer, it certainly proves that size can matter.

Professional advancement in a bureaucracy comes from increasing one’s budget, not from achieving more with less as it does in the private sector.

But does size always matter and is it always good? Public schooling is organized very differently from the retail business. Different incentives apply. Before assuming that economies of scale exist in public schooling, it would behoove politicians to look at the evidence. For that reason, I conducted a statistical analysis of the relationship between district size and per-pupil spending in Michigan’s public school system.

The results are illuminating. The relationship between district size and spending is both weaker and more complicated than many people imagine. District size explains only about two percent of the variation in per-pupil spending and bigger is not always better. Though per-pupil spending does fall as district size increases up to about 2,900 students, the relationship then reverses itself. Beyond 2,900 students, bigger districts generally spend more per pupil.

When I ran the numbers, I estimated that the maximum theoretical savings from breaking up excessively large districts, about $360 million annually, is 12 times greater than the theoretical savings from consolidations. Nothing close to those numbers is likely to be achieved in practice, though, since they would require redrawing the lines for every district in the state, replacing them all with about 570 new districts of 2,900 or so students each. Even if that were feasible, the mobility of the population would eventually throw district sizes out of whack once more. Realistically, a policy of selective breakups and consolidations would not put much of a dent in the $17 billion or so spent each year by Michigan public schools.

As it happens, though, there is another factor that explains 10 times more of the variation in district spending than size does: the ease with which district officials can raise a certain amount of funds per pupil (measured as a function of aggregate income divided by enrollment). And if the ease of raising money largely determines how much money is actually spent, it means that districts are spending as much as they can.

Why would they do that? Professional advancement in a bureaucracy comes from increasing one’s budget, not from achieving more with less as it does in the private sector. The incentives for school board members (and to a lesser extent, other elected officials) are similarly counterproductive: without union support it is hard to be elected or to stay in office, and union support cannot be won without advocating higher spending. Most economists have understood these perverse incentives of public sector enterprises since the 1950s and have spawned an entire subfield to study them, called "public choice."

Of course, public officials might have other priorities in mind besides their own professional advancement or political success. They might want to ascertain exactly how much their local communities value education, and spend only as much as the public wishes. I controlled for that possibility as well and found that it explains only about one fifteenth as much of the variation in spending between districts as the self-interest explanation offered by "public choice." (Note that these patterns in spending between districts can still be studied today, even after Proposal "A" centralized budget decisions, because Prop "A" locked-in much of the variation in spending that predated its passage.)

So if the governor and Legislature genuinely want to control public school spending, they’ll need to correct the dysfunctional incentive system that currently drives up spending and replace it with the same competitive incentives that have promoted efficiency in the private sector. In a nutshell: the solution to the problem of "public choice" is an education system built on parental choice.

Andrew J. Coulson is director of the Cato Institute’s Center for Educational Freedom, author of "Market Education: The Unknown History" and an adjunct fellow for the Mackinac Center for Public Policy, a research and educational institute headquartered in Midland, Mich. Permission to reprint in whole or in part is hereby granted, provided that the author and the Center are properly cited.