The AFL-CIO Picks the U.N. Over the Constitution 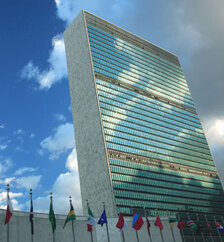 Having trouble convincing your fellow Americans that your way is the way? Looking to claim a "right" not found in the Constitution? Then you may want to consider a novel strategy employed by the AFL-CIO, which recently filed a formal complaint at the United Nations against the U.S. government.

In its Oct. 23 complaint, the AFL-CIO claimed it was responding to "widespread public revulsion" to a National Labor Relations Board finding that some nurses can’t be unionized because they should be classified as supervisors. Specifically, the AFL-CIO seeks to gain the "authoritative voice and moral weight" of a U.N. labor committee to tell Americans what is good for them. This committee, the International Labour Organization, is the United Nation’s vehicle for "the promotion of social justice and internationally recognized human and labour rights."

How we interpret our labor law, or any other law for that matter, is for us to decide, not a foreign dictator or world body.

With all due respect to the AFL-CIO and the U.N., this is not what our Founders envisioned.

Benjamin Franklin, when asked what kind of government the framer’s had set forth in the new Constitution, replied, "A republic, if you can keep it." And for nearly 220 years we have kept it. It may not be perfect, but our Founders gave us what has proven to be a sound system: a constitution setting forth the principles of individual freedom that not even a legislative majority can overturn; a process for electing those who represent us in government; and a regard for the rule of law.

If the AFL-CIO disagrees with an NLRB ruling, the union has recourse right here in the United States. It can put the question on appeal to the U.S. Court of Appeals. If the ruling of that court is unacceptable, the AFL-CIO can take the case to the U.S. Supreme Court. Better yet, if there truly is "widespread public revulsion," the AFL-CIO simply can remedy the situation by persuading the American people that change is needed.

But taking America’s issues to the U.N. is a bad idea. We do not need Venezuela, Iran, Vietnam, Sudan or Libya — all members of the International Labour Organization — to help us make decisions that affect the American people. Why does the AFL-CIO think we should seek the moral imprimatur of governments that repress their citizens and impair their economies?

To believe that foreign nations can have an authoritative influence on our laws is to reject the very notion of U.S. self-government. How we interpret our labor law, or any other law for that matter, is for us to decide, not a foreign dictator or world body. Indeed, once we recognize the "moral weight" of U.N. opinions regarding U.S. law, it is only a small step towards ceding U.S. autonomy.

Our freedom and way of life have been preserved for more than two centuries by American ingenuity and sacrifice — not by the work of the U.N. or the opinions of foreign nations. As a result, the United States has blessed its people, and much of the world, with freedom, innovation and economic advancement. More important, the United States stands for individual freedom in lands where dictators, authoritarian governments and other enemies of freedom still hold sway.

America’s system of compulsory unionism, developed under the strains of the Great Depression, has taken us away from the principles of individualism upon which this country was founded. As the freedom of the individual — whether business owners or employees — is restored, there are bound to be points of friction that will need to be worked out. The question of what defines a supervisory employee is one of these issues. But when addressing these matters, we need to do so within our constitutional framework.

If the American — not U.N. — Federation of Labor and Congress of Industrial Organizations has been wronged by the National Labor Relations Board, let it make its case, pursue its day in court, change the law or engage in the electoral process. But spare us the insult of appealing to the supposed "moral weight" of the United Nations. U.S. workers, whether they are among the 12.5 percent who are members of a union or not, are first and foremost Americans.

Thomas W. Washburne is director of labor policy for the Mackinac Center for Public Policy, a research and educational institute headquartered in Midland, Mich. Permission to reprint in whole or in part is hereby granted, provided that the author and the Center are properly cited.