Ford Did Indeed Have A Better Idea 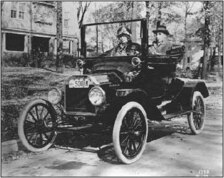 With the Model T, Henry Ford brought the automobile within pocketbook range for the average American family.

Anyone strolling by 58 Bagley Street in Detroit early in the morning of June 4, 1896, would have seen a strange sight: Henry Ford, ax in hand, smashing open the brick wall on his rented garage. He had just started his first gas-powered car and it was too big to fit through the door. In this centenary year of the founding of the Ford Motor Company, we ought to pause to remember what he did, and marvel at how it changed the world.

In 1903, the automobile was such a novelty that few people other than a handful of tinkerers had even sat in one. The city of Detroit fixed a speed limit of eight miles per hour for almost a mile around city hall. Convicted speeders paid $100, which was about two months’ wages for an average American worker. America’s first cars were, as Ford observed, “a rich man’s toy” or, as Woodrow Wilson claimed, a “new symbol of wealth’s arrogance.”

Henry Ford changed all that. He didn’t invent either the auto or the mass production scheme he so brilliantly employed to churn out cars by the millions. But he did, in his own words, “build a car for the great multitude.” When he built the Model T, he “put America on wheels” and made Michigan the car capital of the world.

Ford was an entrepreneur and, as are most entrepreneurs, a visionary as well. His vehicle had to be “large enough for the family” and “constructed of the best materials by the best men to be hired.” And it had to be “so low in price that no man making a good salary [would] be unable to own one.”

Ford’s ingenuity took the assembly line method of production to new heights of efficiency, but he shook the industrial world to its foundations with an amazing gamble: He doubled wages and reduced working hours. “The payment of five dollars a day for an eight-hour day was one of the finest cost-cutting moves we ever made,” Ford wrote in the early 1920s. The five-dollar-a-day wage policy reduced turnover, improved morale, and brought some of the best workers to his plants in Michigan.

It was clear to Ford that hard work and entrepreneurial risk-taking were the sources of America’s great wealth. “Our help does not come from Washington, but from ourselves,” he wrote. “The government is a servant and never should be anything but a servant.”

Henry Ford made the best car at the lowest price and earned a billion dollars. Only when he became complacent with the Model T and refused to innovate did he fall from the top. “It is strange,” he wrote in 1926, “how, just as soon as an article becomes successful, somebody starts to think that it would be more successful if only it were different. There is a tendency to keep monkeying with styles and to spoil a good thing by changing it.”

Ford purportedly once said that customers could have any color of car they wanted, so long as it was black. That kind of thinking had made history out of the horse and buggy makers. In 1927, it would do the same to the Model T. By then, the new Chevrolet from General Motors had a water-pump cooling system, an oil gauge on the dash, a reliable ignition system, a foot accelerator, and a gas tank in the rear for safety and convenience. And, the new Chevys came in a variety of colors. The era of Ford’s dominance was over.

The story of Henry Ford and his car company is an eternal tribute to the free enterprise system — a system that allowed his talents to blossom right here in Michigan and benefit untold millions of people the world over.

(Burton Folsom is a professor of history at Hillsdale College and a senior policy analyst with the Mackinac Center for Public Policy, a research and educational institute headquartered in Midland, Mich. More information is available at www.mackinac.org. Permission to reprint in whole or in part is hereby granted, provided the author and his affiliations are cited.)