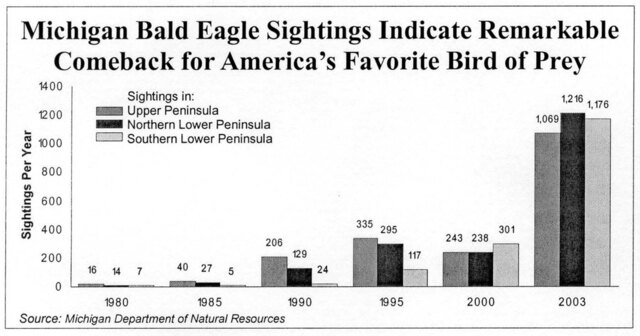 Scores of American Bald Eagles now glide on the wind, roost in the trees and scavenge Michigan shorelines. Their remarkable recovery from endangered status signals improved water quality throughout the Great Lakes.

The bird is a reliable indicator of water quality because raptors top the food chain and subsist mainly on fish and waterfowl. Thus, their numbers increase or decline, in part, based on contaminant concentrations in lakes and waterways.

Eagle sightings soared in a survey conducted January 1-15, totaling 3,461 statewide. The winter survey found eagles in 79 Michigan counties, with about a third of the birds spotted in the Upper Peninsula, a third in the northern Lower Peninsula, and the balance in more southern areas of the state. Cold winters can drive eagles farther south to escape icier conditions. But widespread sightings may also indicate broad environmental improvement.

Sightings alone do not constitute an official census of the eagle population. The winter sighting survey may be skewed by weather conditions and the availability of volunteers. Still, researchers with the Michigan Department of Natural Resources say the latest survey does track other evidence of a burgeoning eagle population in Michigan. This resurgence testifies to the resilience of nature.

Recent analyses of blood and feathers collected from eagle nests in all geographic areas examined found a dramatic decrease in PCB concentrations compared to a decade ago. Likewise, trout samples taken from four Great Lakes show an 85 percent drop in PCB concentrations, from a high of more than 20 parts per million (ppm) in the early 1970s to less than 3 ppm more recently. Mercury levels, too, are lower, while lead accumulations have declined in every sample since the 1980s.

Further improvement still can be made, of course. The United States and Canada have identified 14 areas within Michigan’s jurisdiction in which water quality does not support a full range of uses, such as drinking or fish consumption. Management plans are underway to restore beneficial uses in all impaired areas. But more than aesthetics or political pull should dictate the focus of regulatory attention. The Granholm administration would do well to establish priorities based on the actual threat to public health and environmental degradation.

Michigan began monitoring bald eagle populations in 1961, when as few as 50 occupied nests were observed statewide. Researchers soon established that only 38 percent of nesting pairs were able to raise even a single chick — half the breeding rate necessary to sustain the beleaguered population.

Two decades later, however, a rebound was underway. And by 1999, some 340 nesting pairs were recorded, while breeding productivity reached a robust 96 percent.

Some environmental groups cite the virtual ban in 1972 of the insecticide DDT for the bird’s recovery. Misapplications of the insecticide have long been blamed for thinning eggshells that cause breeding failures, but scientific evidence has proved elusive.

In fact, DDT has saved tens of millions of lives by controlling the spread of malaria, typhus and other fatal diseases carried by mosquitoes, lice and vermin.

The bald eagle was officially classified as “endangered” in 1976, and reclassified as “threatened” in 1995. By all accounts, the bird is now fully recovered. Yet in a victory of environmental politics over science, the U.S. Fish and Wildlife Service has yet to release the bird and the properties it inhabits from federal control. Even if the agency were to act, federal law would continue to protect the birds from capture.

For all Americans, the bald eagle is a symbol of strength and freedom. Here in Michigan, it is also tangible evidence of improved water quality throughout our beloved Great Lakes.

(Sharon Herbitter is a bird watcher and free-lance writer living in Midland, Mich., and Diane Katz is director of science, environment and technology policy at the Mackinac Center for Public Policy, a Midland-based research and educational institute. More information is available at www.mackinac.org. Permission to reprint in whole or in part is hereby granted, provided the authors and their affiliations are cited.)