Joe Louis vs. the IRS 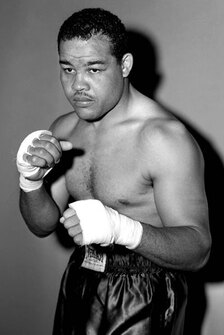 Joe Louis, March 1949.
Source: The Jimmie Dodd Photograph Collection, Center for American History, The University of Texas at Austin. 1407/a

Exactly sixty years ago, in the early summer of 1937, Michiganians took great pride in the outcome of a fight in Chicago. Joe Louis, the "Brown Bomber from Detroit," captured the heavyweight boxing crown by knocking out James Braddock in eight rounds.

Louis had quick reflexes and a strong punch. Some experts think he was the best heavyweight ever. In the twelve years after he beat the stuffing out of Braddock, Louis defeated 24 challengers, 22 by knockout. His hardest fight, however, was not with Max Schmeling or Rocky Marciano, but with the Internal Revenue Service.

When he earned over $371,000 in his first two years as a professional boxer, Louis immediately helped family and friends all over the country. For example, he voluntarily paid back to the government welfare payments his stepfather had received during the Great Depression. Later, he supplied a house for an elderly Indian on property he owned. He also bought needed uniforms for a group of black army officers.

Louis wanted private citizens to solve many of the problems that Americans were increasingly turning to government to solve. He opposed many of President Franklin Roosevelt’s New Deal programs and campaigned for Republican candidate Wendell Willkie for president in 1940. Before the election, Louis sent Willkie this telegram: "Win by a knockout. It will mean freedom from the WPA and for American Negro rights." Meanwhile, tax rates from the ever growing government that Louis opposed were heading toward the stratosphere.

One month after the bombing of Pearl Harbor, the generous Louis gave his entire $65,200 fee (about $700,000 in today’s money) from a fight to the Naval Relief Fund. Less than three months later, he gave his $45,882 purse from another fight (about $500,000 today) to the Army Relief Fund. Ever the patriot, he halted his lucrative boxing career and enlisted as a private, earning only $21 a month.

When the war ended, Louis hoped to retire from boxing with savings in the bank and dignity from his career. He lost both. What he overlooked was the enlarged role of government and the taxes he owed to help keep it growing. Under President Roosevelt, the tax base had expanded to where most American families (not the mere 2 percent of a few years before) had to pay income taxes. Worse for Joe Louis was the steep tax levied on high incomes. From 1931, his first year in boxing, to 1937, when he knocked out Braddock, the top marginal tax rate had soared from 24 to 79 percent. Louis found himself owing the government most of his purse money from each of his fights.

During the 1940s, the top marginal rate was hiked to 90 percent, and Joe Louis found himself over $500,000 in debt to the IRS in back taxes. Roosevelt’s new tax laws were complicated and Louis, unlike later successful athletes, had no tax shelters, municipal bonds, or clever accountants. The IRS would not let him deduct the two fight purses he had donated to the army and navy. He couldn’t even deduct $3,000 worth of tickets that he had bought for soldiers to one of those fights. What’s more, the interest payments were compounded each year, ballooning his debt into seven figures during the 1950s.

Louis retired in 1949, undefeated as a champion, but now he had to fight again. "I had to keep working to pay taxes," Louis said, "but the more I worked, the less I had."

In 1950, Louis "announced that I’d decided to come out of retirement and challenge Ezzard Charles for the championship. The reason—taxes." Louis lost the match in a 15-round decision. After the fight, when Louis called his mother, she "begged me to stop now, but she couldn’t understand how much money I owed . . . . The government wanted their money and I had to try to get it to them."

The next year, for a $300,000 purse, the 37-year-old Louis fought Rocky Marciano, but was knocked out in the eighth round. Technically, he owed the whole purse to the IRS, but since he had to pay a 90 percent tax rate on most of his earnings, plus back interest from previous years, he still could not whittle down his debt. Louis’s boxing career was over, and he would never be able to earn the money to satisfy the tax collectors. He died in debt, a broken man. Were he with us today, he might well be one of America’s foremost champions of replacing the current system with a low, flat tax.

Joe Louis would want to be remembered as a champion, a patriot, and a role model for children. He admitted that he overlooked the new tax laws, that he trusted too many friends, and that he spent money unwisely. As we think about his life, we should remember Joe Louis as an expert in the use of physical force to knock out his boxing adversaries, but as a novice when government used political force to knock him out.