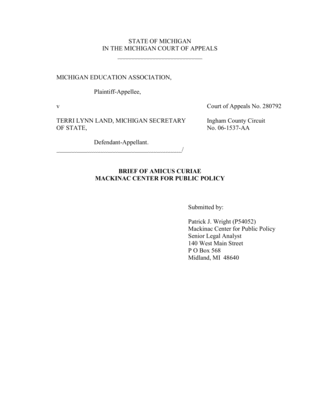 On August 29, 2008, the Michigan Court of Appeals reversed the trial court's decision. This "friend of the court" brief, submitted by the Mackinac Center for Public Policy, argues that a plain reading of the Michigan Campaign Finance Act shows that such paycheck withdrawals are illegal and that this interpretation properly recognizes that government has no appropriate role in advancing partisan political ends.

The brief is currently available as a PDF only (see the hyperlink above).