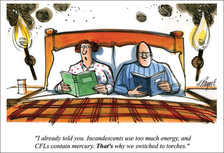 More energy-efficient lighting is challenging the reign of the incandescent bulb. But the alternatives involve trade-offs, too.

Thomas Edison’s monumental gift to modernity, the incandescent light bulb, no longer will be sold in Australia, Canada, Cuba or Venezuela within five years. Similar phase-outs are pending in California, New Jersey and several other states as well as the European Union. Ban-the-bulb advocates contend that Edison’s creation is inefficient and that fluorescent lights are far more environmentally friendly. While this is certainly true in some respects, it is not exclusively so. Moreover, lighting alternatives now under development may soon prove to be superior to both incandescent and fluorescent bulbs.[1]

The campaign to extinguish incandescent bulbs is fueled in large part by concerns over the environmental impact of electricity production — primarily emissions of carbon dioxide. Michigan Sen. John Gleason (D-Flint) introduced legislation on June 12 that would, if enacted, criminalize the sale of incandescent bulbs in the state beginning in 2012.[3]

Compared to some other lighting sources, the incandescent bulb is an energy hog; its light is a product of heat. The glass sphere of the bulb contains a tungsten filament. When electricity is introduced, the threadlike diameter of the filament creates resistance to the energy flow. The resulting buildup of energy creates heat, which makes the filament glow (incandesce). Consequently, only 10 percent of the energy used by the bulb actually produces light. The remaining 90 percent is released as heat. So, for every watt of input power, an incandescent bulb typically produces only 15 lumens (the measure of light output).[4] 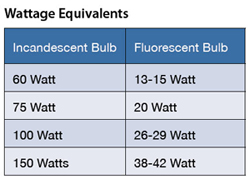 A fluorescent bulb works by transforming ultraviolet light into visible light. A fluorescent bulb is filled with argon and mercury vapors, and the inside of the glass is coated with a phosphor. When electricity flows to the bulb, a reaction between electrons and the gas vapors produces ultraviolet photons. The photons are then absorbed by the phosphor coating inside the bulb, which produces the visible light. Because the fluorescent bulb loses relatively little energy as heat — some 60 percent less than an incandescent bulb — it requires less electricity to achieve the same amount of light.

There is a cost to achieve the relative efficiency of fluorescent bulbs — they require about four times more energy to produce than incandescent lights and thus are far more expensive.[5] A fluorescent bulb can cost between three times and 10 times more than a comparable incandescent bulb.[6] Still, over the lifetime of an average bulb, consumers can realize a net savings in energy costs of about $30 to $40 per bulb if used as recommended.

The economics of fluorescent bulbs versus the incandescent variety are not fixed, however. The heat of incandescent lights — more than 341 Btu per bulb per hour[7] — can help to warm a room. Therefore, if the cost of electricity is low relative to the cost of home heating fuel, there may be an economic case for changing to incandescent bulbs in colder seasons.

For advocates of new lighting regulation, bulb economics are a secondary benefit. The more important advantage of fluorescent bulbs, they say, is the presumed reduction in CO2 emissions from reduced energy consumption.

Less than 6 percent of American households currently use fluorescent lights. In the minds of many consumers, fluorescent light is harsh; the bulbs flicker and buzz incessantly. But advances in lighting technology have improved their performance.

No longer do all fluorescent bulbs emit the cold, eerie blue light of their older cousins. The color differences among various types of bulbs are a function of temperature. Incandescent light appears warmer because it is hotter, while fluorescent lighting is cooler, and thus whiter. But fluorescent bulbs in "warmer" shades of white are now available thanks to an array of phosphor blends. The choice of light color does involve tradeoffs, however. Greater "warmth" in a fluorescent will diminish a bulb’s efficiency and shorten its lifespan. 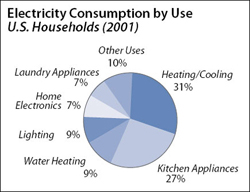 Fluorescent bulbs were long relegated to the workplace largely because of their unfavorable "rendering" of color.[8] Under fluorescent lights, complexions can take on the dull, gray cast of a corpse. Fortunately, manufacturers have improved the rendering of fluorescent bulbs with the development of new phosphor blends.[9]

Rather than just the tubes of old, fluorescents are now available in a variety of shapes and sizes to fit lamps and ceiling fixtures. The tube design is a relic of the external "ballast" within a ceiling fixture that once was required for fluorescent bulbs to operate. The ballast regulates voltage; greater power is needed to turn on the light, but the current must be limited to sustain it. The development of an "integral ballast" contained within the bulb instead of in the fixture has allowed fluorescents to assume a variety of shapes.

Integral ballasts also have helped to eliminate the annoying buzz and flicker of fluorescent lights. Historically, these ballasts have been magnetic devices that operated at only 60 cycles per second, which produced a strobe effect. Newer electronic ballasts operate at 24,000 cycles per second, which eliminates the flicker. Moreover, there’s little of the vibration that caused older bulbs to buzz.[10] Electronic ballasts are also smaller and lighter, which improves bulb efficiency.

Concerns have been raised about the use of mercury in fluorescent lights, which amounts to about 5 milligrams per bulb, on average.[11] In reality, consumers face a greater risk of getting cut by the glass of a broken bulb than being poisoned by the mercury within it. Manufacturers do recommend sealing a spent fluorescent bulb in a plastic bag before disposal, and the bulbs should not be incinerated. But only large commercial users of tubular fluorescent lamps are required to recycle them.

Fluorescents are not without their drawbacks. Most require a warm-up period of up to three minutes before reaching full brightness. They are not recommended for use with ceiling fans or garage door openers, the vibrations of which can cause the bulbs to fail. Most are not suitable for use with dimming switches. Moreover, fluorescent bulbs may cause electronic devices to malfunction temporarily if they "misread" the infrared light.[12]

The efficiency and lifespan of fluorescents are diminished if the bulbs are switched on and off throughout the day, as in bathrooms and bedrooms, for example. They are best utilized for lighting that is left on for several hours at a stretch. But the average household has only 2.5 lights that are on four hours or more per day — typically in the living room and kitchen.[13]

LEDs are composed of wafer-thin materials coated with a conducting el-ement such as gallium or industrial sapphires. The wafers are typically encased in glass. When stimulated by electricity, the LED emits light — the color of which depends on the particular coating applied to the wafer.

LEDs have the advantage of being easily integrated into a variety of building materials, and they can deliver light across multiple planes.[14] Unlike fluorescents, they reach full brightness in microseconds. LEDs also last extremely long, with a lifespan estimated to be as much as 1 million hours. Fluorescent tubes typically are rated for 10,000 hours, and incandescent bulbs at 1,000 to 2,000 hours.

"(W)e ought to be focusing more effort on using electronics to meet our lighting challenges and less on using mercury and phosphor to make light," wrote Nicolas Mokhoff for Electronic Engineering Times.[15]

The chief impediment at present is cost. The typical LED is composed of at least several diodes. An equivalent of a 25-watt incandescent bulb runs about $50. But the average price of a single white diode has fallen from $8 to $1.50 in the past year. Mass production could further drive down the price.[16]

The nature of lighting has changed dramatically throughout human history. Man first used wood fire to break the darkness, before discovering the utility of plant and animal oils. Next came candles of tallow and beeswax, followed by phosphorus and various gas lamps. Thomas Edison’s incandescent bulb lit the late-1800s, and the twentieth century brought fluorescents and LEDs. What the future holds remains to be seen, but there’s every reason to believe that human ingenuity will brighten the future.

[1] Fluorescent lights are now available in a variety of shapes and sizes, not just tubes. Bulbs that fit lamps and other fixtures are referred to as “compact fluorescent lights” or CFLs.

[4] One lumen is the equivalent of the light given off by one candle.

[5] A compact fluorescent requires about 4 kWh of electricity to be made; an incandescent about 1 kWh.

[6] U.S. Dept. of Energy, "A Consumers Guide to Energy Efficiency and Renewable Energy." Available on the World Wide Web at http://www.eere.energy.gov/consumer/your_home/lighting_daylighting/ index.cfm/mytopic=12050.

[8] The accuracy of rendering is rated under the Color Rendering Index, which ranges from 0 to 100, with higher values closer to ideal.

[11] In comparison, home thermometers used to contain about 500 milligrams of mercury; manual thermostats about 3,000 mg. 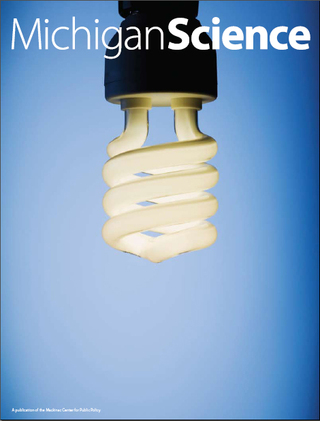