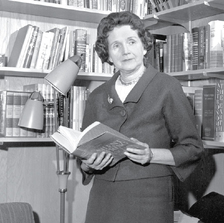 Holding her controversial book “Silent Spring,” Rachel Carson stands in her library in Silver Springs, Md., on March 14, 1963. She said she wanted to bring to public attention her charges that pesticides are destroying wildlife and endangering the environment.
(AP Photo)

Media outlets nationwide have been commemorating the centennial birthday of Rachel Carson, whose 1962 book "Silent Spring" is considered by many to be the inspiration for the modern environmental movement. A May 25 commentary in the Detroit Free Press, for example, credited Carson with begetting the Clean Water Act, the Endangered Species Act and the Great Lakes Water Quality Agreement between the United States and Canada.

In fact, a great deal of Carson’s conclusions about human health and the environment were wrong, more the product of her imagination than proper scientific research. As noted by John Tierney in The New York Times on June 5, Carson was wholly incorrect in asserting that there exists no safe dose of synthetic pesticides. Indeed, Bruce Ames, professor of biochemistry and molecular biology at the University of California, Berkeley, has determined that most potential carcinogens are ingested in such small quantities that they have little to no impact on human health.

Carson’s claims that the pesticide DDT caused cancer in humans ultimately prompted the U.S. Environmental Protection Agency to ban the pesticide in 1972. However, the DDT ban was responsible for the needless deaths of tens of millions of people. DDT had been largely responsible for reducing malaria deaths worldwide, from 1,740 per million in 1930 to 480 per million in 1950 — a 70 percent decrease.

In actuality, the increase in cancer deaths cited by Carson was due to fewer people dying at young ages from other diseases.

DDT does pose risks to birds such as eagles and other raptors. But as Tierney points out, Carson "wildly imagined" a "mass biocide" and the extinction of the robin, which "was an especially odd claim given the large numbers of robins recorded in Audubon bird counts before her book." Nor was Carson the first to investigate the impact of pesticides on the environment, as some devotees claim. The National Academy of Sciences conducted research on pesticides and the environment long before Carson put pen to paper, according to Tierney.

There is no doubt that the environment has improved substantially since the early 1960s, when "Silent Spring" was published. But the recent accolades heaped upon Carson ignore her most significant contribution to modern environmentalism: While she imbedded in the public consciousness a concern for the affects of chemicals on the environment, she also grossly overstated the risks of pesticides. Unfortunately, her simplistic environmental theories fomented unfounded fears about synthetic chemicals that persist today.