1 Documented in Michigan by the Michigan House Fiscal Agency in The Long View: State University Enrollments, Revenues and Expenditures: FY 1977 through FY 2002. A Report to the House Appropriations Subcommittee on Higher Education, by Dr. Hank Prince: "What may be evident ... is development of what is called an administrative ‘lattice,’ which involves an increase in the number of non-instructional employees connecting a university’s infrastructure. Cost efficiencies frequently require revision or dismantling of the ‘lattice’."

3 As a spring Detroit Free Press poll of 640 students at the University of Michigan, Michigan State and Wayne State University suggest, nothing guarantees that students will remain in Michigan after they graduate: Of those polled, 53 percent said they plan to depart the state when they graduate. Of those who plan to leave, 47 percent cite "go to where good jobs are" as the reason. Detroit Free Press, "Most plan to learn, leave: Graduates of big state colleges won't stick around, poll shows," by Kristen Jordan Shamus, April 29, 2007.

4 This point has been made by many scholars, perhaps most strongly by Charles Murray, and also by Murray and Richard Herrnstein in their book "The Bell Curve: Intelligence and Class Structure in American Life" (New York: The Free Press, 1994). It should be noted that studies purporting to measure the positive economic impact of state universities generally do not control for this factor, and assume that the extra earnings that college graduates generate compared with their high school-educated counterparts are entirely the result of their university training. This dubious assumption makes for deeply flawed analyses. See Richard Vedder, "Going Broke by Degree," Viewpoint on Public Policy published by the Mackinac Center for Public Policy, Sept. 6, 2004. 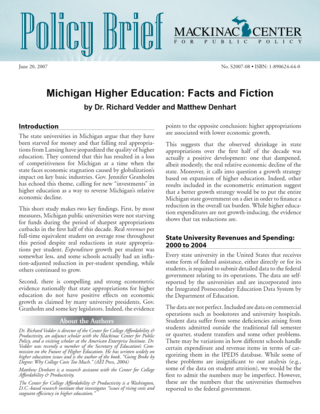