Against the Grain: Tree Rogues Strike Amid Vast Forest Growth 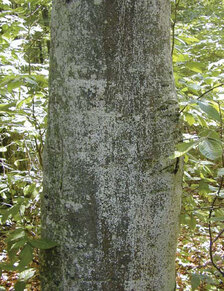 The bark of trees infected with beech scales, which transmit beech bark disease, take on a whitewashed look.

Over the past 50 years, Michigan forests have rebounded from unrestrained logging, massive forest fires and clearing for agriculture. Between 1978 and 1997, the state gained 538,000 acres of forest due to tree growth on open fields and former cropland.[1] Timber volumes have tripled since the 1950s. Despite this remarkable revival, the state’s tree stock isn’t quite out of the woods, so to speak. A variety of pests and diseases continues to threaten several of Michigan’s most distinct tree species.

The skeleton of a dead beech tree towers above young maple undergrowth in a UP forest, an all too common sight.

Not only has Michigan gained forest acreage, but the variety of trees growing in the state has expanded. An inventory by the Michigan Department of Natural Resources found 75 tree species and a substantial number of subspecies.

Insects and diseases evolve with forests, and some may even be beneficial for some species of trees. Pests cull weak and old trees, serving as nature’s cleanup crew. Outbreaks of destructive pests such as the forest tent caterpillar and jack pine budworm do occur, but they typically subside due to natural controls such as birds and other predators. Non-native pests (also known as "exotics") are different. They have not evolved with native forest species, so natural controls may not exist. Consequently, they can threaten entire species of trees.

The proliferation of trade has dramatically increased the volume of international shipping — and the numbers of hitchhiking pests. The U.S. Department of Agriculture inspects less than 5 percent of containers brought to American shores.

Dutch elm disease, an Asian fungus, was transported to America in 1930 via wooden crates from Europe. Spread by the European elm bark beetle, Dutch elm disease hit Michigan from the east in about 1950. Virtually every large elm in the state succumbed. Streets that once were shaded by grand arches of foliage were laid bare by the epidemic. Elm trees still exist, but only because they typically grow to reproductive age before they die.

The dreaded gypsy moth first reared its ugly head in Michigan during the mid-1950s, although it was originally loosed in Massachusetts in the 1800s. The moth was brought to North America by professor L. Trouvelot, who wanted to breed a hardy silkworm. Some of the moths escaped after a specimen jar fell from the professor’s open window, and they multiplied in a vacant lot adjacent to his home in Medford, Mass. Trouvelot notified townspeople about the accident, but no action was taken.[2]

The hairy, leaf-eating caterpillars, which are native to Europe, Asia and North Africa, descend on fruit and shade trees — oak is their favorite — and defoliate every limb in a matter of days. The worst outbreaks in Michigan occurred in the 1980s and 1990s. In recent years, a variety of birds, mice and insects has added gypsy moths to their diets, helping to manage its numbers.

The newest forest rogues are the emerald ash borer and beech bark disease,[3] which are proving to be just as deadly as their predecessors. Millions of trees in Michigan have died in the past seven years, and the end of the epidemic is nowhere in sight.

The emerald ash borer, an Asian beetle, has killed some 15 million ash trees in Michigan. Hardest hit has been southeastern Michigan, where the "Green Menace" was discovered in 2002. The emerald ash borer is so named for its green color and because the larvae bore into the bark of the ash tree. They feed on the soft inner wood and the phloem, the tissue that transports sugar to the roots. So starved, the roots fail to produce nutrients to feed the tree, which eventually dies. The beetle attacks all species of ash, but other hardwood trees are immune. 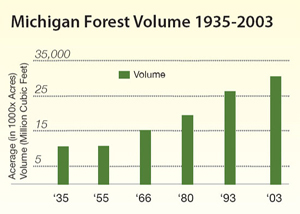 The number of trees in Michigan has increased nearly three-fold in 70 years.

Virtually all ashes are gone in some communities, including Farmington Hills, Auburn Hills and Ann Arbor. The economic costs of the infestation exceed tens of millions of dollars, and could go much higher. Michigan State University researchers and Genesee County Parks and Recreation Commission staff announced plans in April of this year to treat 70 ash borer infested trees in Richfield Township’s Wolverine Campground this summer. Scientists will test neonicotinoids (pesticides commonly used for controlling lawn grubs) on ash borers by injecting the chemical into tree trunks and soil surrounding the infested trees. It is hoped that further research conducted in Genesee County this summer will reveal information on the ash borer’s reproduction cycle.

Beech bark disease is caused by the beech scale, a sucking insect introduced into eastern Canada in 1890. The beech scales feed on tree sap and spread pathogenic fungi (Nectria) that destroy the bark and leave the tree susceptible to invasion by other insects and fungi. "Beech snap" occurs when the weakened trunks are broken by a strong wind. The tiny scale covers itself with a white wax as protection from predators, leaving the trunk and branches of infected trees looking white-washed.

Thus far, serious beech bark infestations have occurred in the Michigan counties of Emmet, Grand Traverse, Leelanau, Mason, Manistee, Oceana and Wexford in the northwestern Lower Peninsula; and in Alger, Chippewa, Luce, Mackinac and Schoolcraft counties in the eastern Upper Peninsula. Old, large beech trees in these areas are dying at an alarming rate. There are so many dead beeches being cut in the U.P. that sawmills no longer accept them. The ecological consequences of the tree loss are yet unknown, but clearly the more than 40 species of birds and mammals that feed on beech nuts are experiencing lean times.

At present, containment of the beech scale and ash borer is the primary means of control. Dead or dying trees must be quickly felled and, if possible, sawn into lumber, chipped or burned. Transport of beech or ash logs and firewood beyond infested areas is prohibited, as is the transport of ash nursery stock out of quarantined areas. While some insecticide treatments against the ash borer are registered, the cost of widespread applications is prohibitive. The beech scale is particularly difficult to control with chemicals because their waxy outer layer serves as a protective barrier.[4]

Few beech or ash trees show a natural resistance to either pest; out of millions of trees, a handful may be resistant. The challenge is to determine whether they are biologically resistant or simply escaped infestation. Seeds and cuttings can be collected for testing and, if resistance is confirmed, replanting.

Michigan’s forests are a tremendous natural resource, providing habitats for a wide variety of tree and animal species and scenic vistas for hiking and other recreational activities. Despite the expansion of tree species in Michigan’s forests — and the growth of forest acreage — over the past several decades, a continued vigilance against insects and diseases afflicting our forests will be an ongoing concern.

[3] For more information on these and other pests, go to ( http://web2.msue.msu.edu/bulletins/intro.cfm). A number of bulletins are listed that can be purchased or downloaded to a computer as pdf files. Emerald Ash Borer in Michigan, ( http://www.emeraldashborer.info/michiganinfo.cfm) is another informative web site. 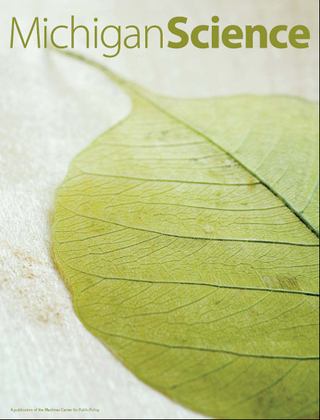