Four cents per gallon of the increase, plus all 10 cents of the diesel increase, would go to a new high priority highway network, for a total of $291 million. Half of all future index revenue increases would also go into the high priority network fund. The high priority network would consist of National Highway System (NHS) eligible roads (4,761 miles) plus another 10,000 miles of other principal and minor arterial roads, for a total of 14,761 miles. The additional 10,000 miles would be selected by a committee of state, county and city officials. Each of the three jurisdictional levels would be apportioned a percentage of the 10,000 additional miles based on their jurisdiction’s percentage of total principal and minor arterials in the state. Based on Table 11, 57.5 percent of major and minor arterials are state owned, 29.1 percent are county owned, and 13.4 percent are city owned. Using these percentages the 10,000 miles would be assigned to each jurisdictional level. The end result would be a priority network consisting of 10,200 (69.1 percent) miles of state roads, 3,129 (21.2 percent) miles of county roads, and 1,432 (9.7 percent) of city/village roads, for a total of 14,761 miles. Table 11 summarizes these calculations. Representation on the above committee would be based on the percentage of priority network roads that each jurisdictional level has in that system. 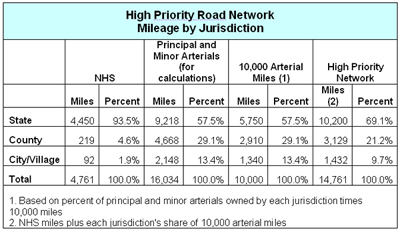 The new funds would be allocated to specific projects on the state and local roads within the network based on the above broad jurisdictional percentage mix. The committee established above would also pick the actual projects to be funded each year, based on applications from various road agencies. Projects would have to be in any necessary five-year plans to be eligible. Should an insufficient number of local applications for funds be received to meet the above percentage mix, county and city monies would be available for use on state roads. The committee described above could vote annually to add up to 3 percent of new miles to the network, but would have to offset the new miles by eliminating a like percentage from the system.

For a given county or city road to be eligible for funding, recipient agencies would also have to adopt the asset management program recommendations of the existing state/local agency Michigan Asset Management Council.[126] These recommendations relate to pavement condition reporting, traffic counts, etc. County and city jurisdictions would also have to accept state guidelines for truck access, and not place additional limits on truck weight, size, etc. for any road under their jurisdiction, to be eligible for priority network funds to be spent on any of their eligible roads. Finally, recipients should be required to agree to MDOT and/or auditor general performance and financial audits of all their Act 51 expenditures in order to be eligible for these funds.

This high priority network will allow for highway funding to be focused on a new network of key roads that are most important for promoting economic development in the state. Such a network would represent the key commercial network roads as well. While the state has the primary responsibility for economic development, and is perceived to be responsible for all Michigan roads, only 8 percent of route miles in the state are actually owned by the state. A large percentage of the key roads that should be on a priority network is state owned, but a significant percentage is also on the county and city system.

In the past, there have been several efforts to make major changes in jurisdiction of roads so that the state could take over and be directly responsible for the most important roads in each county. Efforts have also been made to change the geographic formulas to target more road monies to counties and cities where there is significant traffic growth. However, past efforts to change jurisdictions and formulas have been unsuccessful. The high priority network will allow both state and local road officials to focus their efforts on the key roads, without any changes in jurisdiction or formulas being required. In fact, such a network was one of several recommendations made by the 1998 Funding Study Team appointed by the Legislature – although they described the network as a “Commercial Priority Network.”[127]