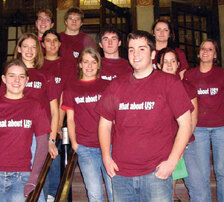 Students at Wright High School in Ironwood wear T-shirts expressing their views on contract talks between the teachers union and the school board.
Photo provided by the Ironwood Daily Globe

Student protests are nothing new. Ranging from altruistic to zealous, they’ve run the gamut of the political spectrum, from war to civil rights to the choice of commencement speakers. Young protestors have been killed while standing up for their beliefs in places like Budapest and Tiananmen Square.

The slogans, chants and banners of the 1960s have been replaced by the T-shirts, lapel ribbons and yard signs of today. T-shirts especially are fast becoming the expression of choice when it comes to contract disputes between teacher unions and school boards. It’s routine for teachers to show up in classrooms, at school board meetings or on informational picket lines wearing matching T-shirts emblazoned with the number of days they have worked without a contract. 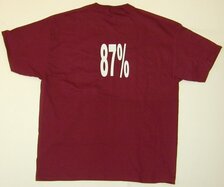 The back of the shirts read “87%,” a reference to the percentage of American workers who choose not to belong to unions.

A group of Ironwood students in Michigan’s Upper Peninsula recently turned the T-shirt-as-protest strategy on its head. Around 100 of them put their collective foot down and said "enough is enough" to the collective bargaining problems plaguing the local adults.

Just because Ironwood is so far west that it’s in the Central Time Zone doesn’t mean it is immune from Michigan’s myriad labor struggles involving teachers and school board members. Health insurance costs and length of the school day are two major issues that have separated the Ironwood Education Association and Ironwood Board of Education since the last contract expired June 30, 2005. According to the Ironwood Daily Globe, teachers have responded with candlelight vigils, informational pickets and, of course, protest T-shirts.

The students are not impressed.

"We want it to come to a conclusion or compromise," senior Ian Edwards told the Daily Globe. "It seems a little unprofessional and inappropriate."

Junior Katie Rayner told the newspaper she felt teachers were treating students differently in the classroom as a result of the dispute.

For the record, it should be noted that Edwards is the son of school board member Jeff Edwards, while Rayner is the daughter of district Superintendent James Rayner. Does this make them more sympathetic to the "management" side of the issues? Maybe. Do they still have a right to express their concerns as students caught in the middle? Absolutely.

Edwards, Rayner and about 100 other students at Luther L. Wright High School decided to stage their own protest to express their displeasure with the adults. On Jan. 17 they wore matching maroon T-shirts that read "What about US?" on the front and "87%" on the back. The "What about US?" slogan is easily understood; students feel left out, cheated and shortchanged as the grown-ups squabble over budgets, insurance and working conditions. The conversation has spilled over into the classroom by day and the dining room table by night. Both sides probably have legitimate issues, but they shouldn’t lose sight of the students in the process.

But what does the "87%" signify? That figure, according to Ian Edwards, refers to "the percentage of America that goes to work without a contract." Most American workers willingly enter into voluntary agreements with employers without a union-negotiated contract. These workers are paid based on merit, ability and achievement, and, by the same token, can be fired for being lazy, ineffective or incompetent.

So how did this display of student unity go over with their teachers? Like a lead balloon. Junior Alisha Stanczak told the Daily Globe that one teacher made her leave the classroom. Is this what we want in our educators? Even in disagreement, teachers everywhere should be applauding the "Ironwood 100" for adding their voices to the process and sticking up for themselves.

The fact that 100 students would take such a public stand says a lot about how bad they perceive the situation to be. Wright High School covers grades six through 12, and only has about 700 students. It’s hard to measure the success of such a demonstration, but apparently the teachers haven’t worn their T-shirts since.

For nine months, the decision makers have haggled over this contract. The Michigan Education Association rushed a "crisis team" to Ironwood to meet with the local union. The school board has rejected three consecutive contract proposals from teachers. The students, meanwhile, are left to wonder, "What about US?"

This is often the sentiment of two groups — parents and students — who are most affected by powerful, well-funded education groups that lobby on behalf of their members and officials’ interests and sway the results of school board elections. The stand taken by the Ironwood students ought to make Lansing policymakers and Michigan residents pose the same question: "What about the parents and kids?"

Ted P. O’Neil is an education research associate with the Mackinac Center for Public Policy, a research and educational institute headquartered in Midland, Mich. Permission to reprint in whole or in part is hereby granted, provided that the author and the Center are properly cited.