AT&T had the most to gain from raising regulatory barriers to market entry.

Michigan’s first local telephone company emerged in 1877, when an Upper Peninsula businessman strung a line between his inland office and the Lake Superior port at Ontonagon.[10] By the century’s turn, some 200 telephone companies were providing service in the state.

In response to the burgeoning competition, American Telephone and Telegraph (AT&T) began buying up rivals. But AT&T’s acquisitions troubled federal authorities, who began mulling antitrust action. This prompted company officials to propose what subsequently became known as the “Kingsbury Commitment.” On Dec. 19, 1913, AT&T agreed to sell $30 million of its Western Union stock and to allow competitors to interconnect with its network. The company also pledged that for every new local system acquired, it would sell an equal share of lines to rivals.

This arrangement was wholly in keeping with the brilliant strategy of AT&T’s then-President Theodore Newton Vail, who aggressively promoted telephone service as a “natural monopoly.” Public officials, eager to regulate the nascent industry, embraced Vail’s motto of “One Policy, One System, Universal Service.”

Of course, as the nation’s dominant service provider, AT&T had the most to gain from government raising the regulatory barriers to market entry. The more difficult it was to launch competitive service, the more secure was the company’s market share.

Congress first vested federal regulatory authority over telephone services in the Interstate Commerce Commission, under the Mann-Elkins Act of 1910. This followed the practice of local franchising initiated by states and municipalities to control rates and service quality.

The theory of “natural monopoly,” now widely questioned, presumed that redundant telephone infrastructure was economically inefficient. Monopoly power could simply be tempered through regulation. In hindsight, competition might well have yielded new technologies and applications that instead took decades to achieve.

The “natural monopoly” theory gained widespread currency. For example, a 1921 report by the Michigan Public Service Commission concluded that “Competition resulted in duplication of investment,” and that states were justified in denying requests by rivals to deploy new lines.[11] A report that same year from the U.S. House of Representatives likewise concluded that, “There is nothing to be gained by local competition in the telephone business.”[12]

The drawbacks to the regulated monopoly approach are now more widely recognized. Firms that enjoy government protection from competition, and for whom rates of return are guaranteed through regulation, face less financial pressure to innovate or operate efficiently. Moreover, bureaucrats often became so committed to the regulatory structure that they regard competition as a threat rather than as a potential solution to the very structural conditions that led to the adoption of regulation.

By 1925, telecom rate regulation was in effect across most of the nation, and competition was either discouraged or explicitly prohibited. The regulatory structure was finalized when Congress created the Federal Communications Commission in 1934.

In enacting the Communications Act of 1934, Congress authorized the new agency to impose telecom service requirements at regulated rates. Any deviations in product or service required government approval. Odd as it may seem, these regulatory strictures still partially persist even as Moore’s Law — the predicted doubling of data density every 18 months — accelerates the pace of technological change.

But as noted by a 1988 Department of Commerce report: “The chief focus of the Communications Act of 1934 was on the regulation of telecommunications, not necessarily its maximum development and promotion. (T)he drafters of the legislation saw the talents and resources of the industry presenting more of a challenge to the public interest than an opportunity for national progress.”[13]

Thus, with the cooperation of state and federal officials, AT&T secured its dominance over telephone service for decades to come, controlling more than 80 percent of all telephone lines and assuming family status as “Ma Bell.”[14]


The Breakup of the Bell System

Challenges to AT&T’s protected standing arose in the 1970s, prompting the FCC to allow limited entry into long distance services as well as into enhanced applications such as computer processing. Local service, however, remained off limits to competition. This regulatory disconnect continues today despite technological advances that have rendered obsolete any distinction between local and long distance calling.

In the mid-1970s, the U.S. Justice Department filed an antitrust lawsuit against AT&T based on complaints by MCI and other long distance service providers. The lawsuit went unresolved for eight years. In 1982, the company settled with the government under conditions ordained by Judge Harold H. Greene, of the Federal District Court for the District of Columbia.

The landmark settlement required AT&T to divest its local operating companies, and to restrict its services to the long distance market. Thus, in 1984, Michigan Bell became Ameritech Michigan, one of seven regional “Baby Bells” that assumed control of local calling services. AT&T was allowed to keep its equipment operations. (These were later spun off as Lucent Technologies.) Judge Greene retained jurisdiction over the case for more than a decade, effectively elevating himself as the nation’s telecom czar. Virtually every major business decision required approval by both the judge and the FCC.

A subsequent series of mergers and acquisitions reduced the number of regional operating companies from seven to four: SBC, Verizon, BellSouth and Qwest. In Michigan, Ameritech was acquired by SBC in 1999, and Verizon acquired GTE, another Michigan carrier, in 2000.

The artificial distinction between local and long distance services created by the Bell breakup produced regulatory upheaval as new technologies and services developed. Would Internet access be classified as a long-distance service? Would the Baby Bells be permitted to provide voice messaging and other “information services”?

Congress sought to calm the chaos with passage of the Telecommunications Act of 1996. Cognizant of the benefits realized through long distance competition, lawmakers effectively declared an end to the monopoly franchise system governing local calling.

Congress also presumed that the Federal Communications Commission could manage the transition to local competition better than the market. But as noted by John Thorne, senior vice president and deputy general counsel of Verizon, “Regulators sometimes make massive mistakes, especially when they cling to traditional approaches that have been overtaken by profound changes in technology and markets.”[15]

In fact, as documented by the data in Section III of this report, the onerous and costly regulations imposed by the FCC have actually inhibited competition in local wire line services and contributed to a massive loss of investment.

The principal problem was the regulatory seizure of private property, which invariably skews investment incentives. Congress forced incumbent local telephone companies to share their facilities with rivals at regulated rates. By lawmakers’ reasoning, competitors would need to establish market share before they would build independent facilities with which to compete.

Congress delegated to the FCC the authority to determine which facilities should be shared, and how various parts of the network, called “unbundled network elements” (UNE), as well as the entire network platform (UNE-P) would be priced. However, lawmakers did establish an eligibility baseline for this subsidized access. It was not intended to be an entitlement. Eligibility was supposed to be based on whether a competitor would be “impaired” from competing if they were denied access.

Section 251(3)(2)(B) of the 1996 act directs the FCC to “consider, at a minimum, whether … the failure to provide access to such network elements would impair the ability of the telecommunications carrier seeking access to provide the services that it seeks to offer.” (Emphasis added.)

The FCC established a pricing formula for network elements, called “Total Element Long-Run Incremental Cost” (TELRIC), based on the cost of building and operating a hypothetical maximum-efficiency network. The rates subsequently calculated by most states cover an irrationally broad range, and most have proven to be economically unsustainable.

As explained by Verizon’s John Thorne, the TELRIC rates bear no resemblance to market realities. “The regulatory discount for ordinary resale is typically 20-25 percent; the UNE-P typically prices out at a discount of closer to 60-65 percent. UNE-P serves no purpose whatsoever, except to permit a game of regulatory arbitrage, conducted by companies that have built nothing in the way of a network at all.”[16]

From a plain reading of the 1996 act, there can be no doubt that Congress intended to restrict regulated network access. Yet the FCC crafted eligibility standards that effectively granted access subsidies to any and all competitors for the asking. This disregard of congressional intent was recognized by the U.S. Supreme Court, which struck down the FCC regulations in 1999 and ordered the agency to rewrite the access rules.[17]

Admonishing the agency for regulatory activism, the court reminded FCC officials that “[If] Congress had wanted to give blanket access to incumbents’ networks, [it] would simply have said (as the Commission in effect has) that whatever requested element can be provided must be provided.”

Far from being humbled by the highest court in the land, the commission subsequently produced another set of overbroad access regulations. The so-called “impairment standard,” which was supposed to limit eligibility for subsidized access, was crafted in language only a handful of telecom lawyers could actually interpret — and which gave the FCC the widest possible latitude:

This second set of impairment standards was also struck down as unconstitutional in May 2002 by the U.S. Court of Appeals for the District of Columbia, which accused the agency of indulging in “lofty abstractions” and “differentials so broad, we have no way of assessing the real meaning.”[19]

The FCC’s third attempt to craft lawful regulations debuted on Aug. 21, 2003. On August 22, the newsletter of equity research firm Jefferies & Company, Inc., featured the headline: “FCC’s Big Order Finally Out — So Let The Lawsuits Begin!” Dana Frix, a telecom lawyer with the New York law firm of Chadbourne & Parke, told the International Herald Tribune: “Every word will be challenged. My children will go to college on this stuff. This is a lawyer’s dream.”

The contentiousness was not limited to the courtroom. The FCC itself was deeply divided, having approved the order by a vote of 3-to-2. Commission Chairman Michael Powell, who joined Commissioner Kathleen Abernathy in dissent, publicly excoriated the majority for “taking a politically expedient course instead of the right course.”

“The decision,” Powell said, “will prove too chaotic for an already fragile telecom market. In choosing to abdicate its responsibility to craft clear and sustainable rules ... the majority has brought forth a molten morass of regulatory activity that may very well wilt any lingering investment interest in the sector.”

What so displeased Powell and much of the telecom industry was the decision by the commission majority to foist upon states the responsibility for determining whether market conditions justify subsidized access, rather than crafting a federal impairment standard as Congress intended. If allowed to stand, the Triennial Review Order will require 50 state utility commissions to issue 50 sets of standards for determining whether competitors are eligible for subsidized network access. The resulting regulatory nightmare exemplifies why the Founders vested in Congress authority over interstate commerce.

The commission majority defended its action by asserting the need for a more “granular” analysis of impairment than could be accomplished from Washington.

Powell and his supporters, however, declare other motives at play. “Make no mistake,” he said in his dissent, “the role of the states dominated this proceeding solely because states are perceived as a more favorable venue for preserving the status quo of aggressive [subsidized access] rights. ... The record was beside the point. The goal was to keep [subsidized access] in place. In so doing, the Majority’s decision substantially repeats the errors of our past approaches.”

Powell’s sentiments were echoed by Wall Street analysts such as Bernstein Research Call, which predicted that giving states such broad regulatory latitude would “... result in ‘gaming’ on the part of the state commissions predisposed to insuring the perpetual availability of [subsidized access].” 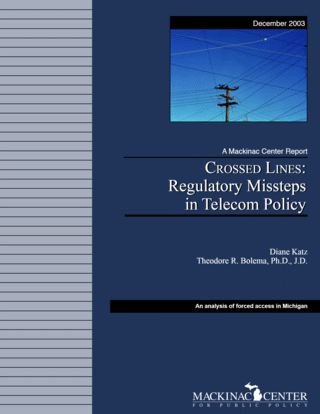