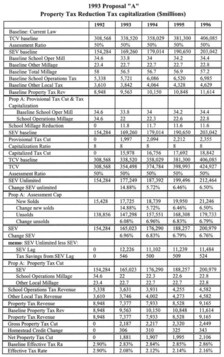 The revenue projections were generated by an economic model developed by the author for the Mackinac Center for Public Policy. The model differs from the standard, "static" models commonly used in government agencies, in that it attempts to estimate the actual dynamic behavior of individuals when confronted by changes in tax rates.

The baseline assumptions [48] for current law include:

There are three explicit dynamic effects in the model. The first is tax capitalization, discussed at length in Appendix II. A provisional tax cut is calculated, using a simple static analysis. The provisional tax cut is then capitalized, by multiplying it by the capitalization ratio. This capitalizedtax cut is then added to the baseline True Cash Value (TCV), and, multiplied by the assessment ratio, becomes the (unlimited) SEV for the "A" projection. This SEV will be larger than for current law, so the gross tax cut – the difference between current law and projected tax revenue – will be smaller than a static analysis would indicate.

The second area of dynamic influence is the projection of additional tax revenue from other taxes, on additional disposable income left from the property tax cut. A fraction of this is assumed to be taxed, after incorporating the avoidance factor for the sales and use taxes. The third dynamic effect is the tax avoidance behavior of consumers.

Assumptions for dynamic effects in the model include:

The capitalization ratio, tax elasticity, and other dynamic factors used in the model are conservative. A full dynamic model would attempt to include changes in employment, investment, and other factors, and would likely generate larger dynamic changes than those indicated here.

The assessment growth cap presents a difficult modeling problem. The algorithm used here to project SEV under the assessment cap works as follows:

This, and all models, suffers from the fact that averages and totals were used. rather than truly aggregating all the various local units of government. This will always introduce some error.

Proposal A: An Analysis of the June 2, 1993, Statewide Ballot Question