Habit 5: Participate in the Schools-of-Choice Program

The fifth habit that characterizes fiscally responsible school districts is participation in the schools–of–choice program. In 1996, the state of Michigan made it easier for parents to choose their child’s school from among those in their own and neighboring public school districts. Previously, parents wanting to send their children to schools other than their assigned district school were required to pay tuition to the school district of the desired school unless they obtained permission for the transfer from their assigned school distict.[41]

The number of students exercising public school choice is increasing; however, the number of schools involved in the schools–of–choice program is limited because districts control whether or not they participate, and to what extent.

According to the Michigan Department of Education, a total of 463 out of 554 districts participated in Michigan’s state schools–of–choice plan last year. Of those that participated, 169 districts adopted their own plans, offering very limited forms of choice. Ninety–one districts do not permit choice at all. Overall, the number of students participating statewide in the choice program has grown from 5,611 in the 1996–97 school year to 33,506 in 2001–02,[42] less than 2 percent of Michigan’s 1.7 million K–12 public school children.

Participation in the schools–of–choice program is fiscally responsible for two reasons. First, competition creates incentives, which in turn gives rise to reform. The Dearborn City School District is a case in point. “We welcome competition. The reforms we’ve enacted would not have happened, at least not as fast, without competition,” says Jeremy Hughes, the district’s superintendent.[43]

During the 1990s, as choice increased through the growth of charter schools and public school choice, Dearborn began preparing to retain and attract students. New, specialized programs were developed, with parents’ wants and needs becoming the primary focus. Second, participation in the schools–of–choice program is fiscally responsible because it financially rewards successful school districts. Concurrent with Dearborn’s aggressive efforts to recruit students, enrollment at Dearborn public schools increased from 13,857 in 1994–95 to 17,075 in 2000–01 even as competition from neighboring school districts and charter schools has increased. Each out–of–district student brings with them $6,700 in state per–pupil funding.

In other words, even with such limited choice, parents are beginning to see the potential these programs have to improve schools. Dearborn parents say the district must show improvement and offer better educational services to lure students to the district. Districts that do not participate in the program or respond to consumer demand face the possibility of losing students, and funding, to other districts.

“People are going to have to see the improvements in the curriculum,” Rose Starks, a parent of three children in the Detroit school system, told the Detroit News. “If you can satisfy the parents and the children here now, you can then attract new ones. If you don’t meet the needs of a basic and challenging curriculum, clean and safe buildings, you will not retain the students you have,” she said.[44]

Public school choice options are a reality across Michigan – whether it be through interdistrict choice or charter schools. Fiscally responsible districts face this reality and the consumer demand it enjoins with confidence by participating in choice programs, offering options to their consumers and seeking to improve services. The environment of choice provides an incentive for change and the impetus for schools to improve, reduce excessive costs and direct more money into services for students. 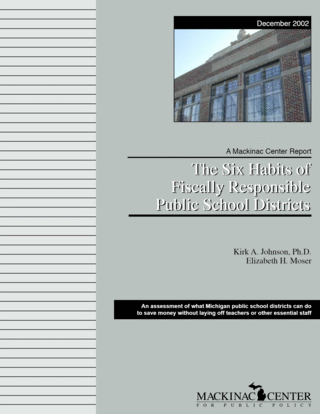