The move, which could have eased the district's current budget woes had it been taken sooner, was blamed by some workers and union officials for the layoff of 69 employees only days earlier. But Senior Deputy Chief Executive Officer Robert Moore said the layoffs were due to belt-tightening, and that although the Aramark contract had indeed eliminated 43 sub-foreman positions, these people had not been let go, but had been sent back to labor positions. The 69 who were laid-off were some of 688 who have been laid off in recent months due to shortfalls projected in the district's budget for the 2002-03 school year. Unionized demonstrators protesting the job cuts created such a disturbance that at a February school board meeting had to be cancelled.

Of course, the privatization will probably save the taxpayers of Detroit a considerable sum, and deliver better services for those who matter most, the students. In addition, Aramark ServiceMaster will revamp the district's maintenance department to provide higher quality service. Among the planned improvements are putting a deadline on work orders (there is currently a backlog of 20,000) with a new software program, selling the maintenance warehouse and buying smaller, more centrally located buildings, and giving workers district vehicles stocked with supplies so they don't have to drive back to the warehouse for parts. 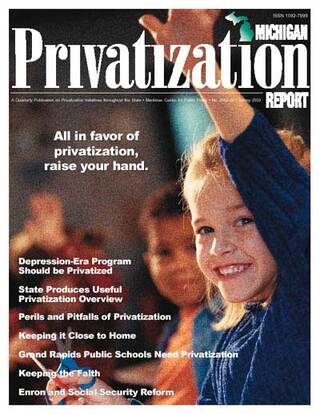