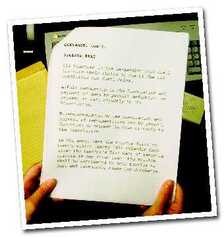 Should schools require teachers to join a labor union?

On Sunday mornings, when my children complain about getting up and getting ready for church on their only day to sleep in, I use one of my favorite parent lines: "Darlings," I say endearingly, "you don't have to go to church, you get to go to church." It's sort of that way with unions. It's not easy to part with one's hard-earned dollars in order to be a member of something of which the benefits are not always immediately apparent. But in the long run, it's worth it.

Unions are a cornerstone of our democracy; they are the voices of many banding together to speak more loudly than any individual ever could. Every working man and woman in America owes a debt to America's unions. Not only have they raised the standard of working and living for each individual they represent, they have improved the institutions with which they are affiliated, the places where union members work.

Nowhere is that more true than in American education. Unapologetically I will say that unions have dramatically improved the pay and working conditions of teachers and other educational employees. If that were not the case, we would be looking at an even greater shortage of teachers than is already predicted for the 21st century. Unions need to continue to strive toward benefits that are commensurate with one of the noblest professions, but they need to continue their longstanding tradition of advocacy for schools and children as well.

Compulsory union membership is not an obstacle to educational reform, as some would claim; it is an integral component of change and improvement in our public schools. A study by the Institute for Wisconsin's Future bears this out. Their research indicates "student performance is significantly better in states where over 90 percent of teachers are unionized." This study takes into account region, family income, race, school spending, and levels of private school attendance. Students in these highly unionized areas scored significantly and consistently higher on the SAT college entrance exam and the National Assessment of Educational Progress (NAEP) fourth grade reading test in a state-by-state comparison. This is in sharp contrast to districts that had low (less than 50 percent) or even moderate (50 percent) union participation. These same conclusions are echoed by a study published in the winter 2000 Harvard Educational Review. This article, by a clearly nonpartisan publication, refutes perceptions by those who criticize public schools and public school unions. It cites higher test scores on both the ACT and SAT in "states with greater percentages of unionized teachers."

After close scrutiny of the factors above, the Wisconsin group also indicates that collective bargaining does not harm student performance. In the last 10 years, school performance among all children has been improving. Differences in performance occur more between states than over time periods. In fact, report after report demonstrates that unionization is associated with more stable, productive school environments with higher test scores.

This study goes well beyond the assertion that unions may have a neutral or, at best, mildly positive effect on schools. In fact, their findings show that "Teachers' unions have increased productivity and quality in schools by helping to regulate working conditions." Couple this with the huge turnover of staff seen at charter and private schools and we have a partial explanation of the constructive role unions play in schools.

Scores of public school students are improving in almost every subject area as well. Breaking up unions or offering optional union membership would reverse this trend. Student achievement in math and science as measured by the NAEP has shown a steady increase for all ethnic groups over the last 15 years, as cited by a study of the National Science Foundation. A report by the College Board, cited by reporter Mary B.W. Tabor in the March 27, 1996 New York Times, indicates that American students continue to improve their SAT scores. Scores on the math component of this test were the best in two decades. Scores on the other major college entrance test, the ACT, have also risen.

All these data fly in the face of the accusation that unions are thwarting the improvement and achievement of public schools. Conversely, education associations have held to the research-based data which show that real school improvement comes from support for quality teaching, modernizing America's schools, educating from early childhood, fully funding the Individuals with Disabilities in Education Act, opening the doors to higher education to more of our country's children, and lowering class size. This is the plan for educational excellence that unions propose to our national legislature.

Fred Baker is president of the 660-member Midland City Education Association. He was a language arts teacher for the Midland Public Schools for 21 years before being elected to his present position.