"It's all about the children" 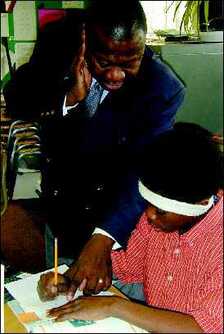 Principal Wes Ganson has engineered such a turnaround at Detroit's McMillan Dual Multicultural School that parents from outside the school's district-assigned boundaries are clamoring to get their children enrolled.

Wesley Ganson says he was well aware of the challenges he would face once he accepted the principal's position at James B. McMillan Dual Multicultural School. McMillan, a public K-8 school in the heart of Detroit, was dealing with myriad problems, including a neglected 106-year-old building and declining enrollment.

"My friends were concerned about my decision," recalls Ganson. "They wondered if I really understood what I was getting into."

Today, no one doubts that Ganson has a firm grasp of what needs to be done for the children at McMillan. From the beginning, he believed he could provide the dynamic leadership needed to turn the school around and make McMillan an oasis of hope for the community.

"I graduated from Detroit Public Schools. What better way to come back to the community and serve?" he says. "I believe that you can graduate from a Detroit public school, and you can go on and get your degrees. You can make something out of yourself."

McMillan is now considered one of the best schools in the area. The reputation of the teachers and Principal Ganson continues to attract students far beyond the school's geographic boundaries. Many parents are pulling their children out of schools that are right across the street from them to take them miles away to McMillan.

Since Ganson took the helm three years ago, McMillan's enrollment has increased from 287 to nearly 400 students. Approximately one-third of the students come from outside the school's district-assigned boundaries. This growth is quite an achievement, considering Detroit Public Schools have lost approximately 19,000 students in the last few years to public and public charter schools in surrounding districts.

Ganson describes McMillan as being in "deplorable" condition when he arrived. But he seized the opportunity to involve the community in restoring the historic school building. Along with help from parents, he organized a major "beautification" effort, repainting the school inside and out and cleaning up the fields around the school. Ganson also encouraged nearby corporations to donate playground equipment and school supplies. And last summer, the Detroit City Council designated the school as a local historic district.

Much of McMillan's success is related to Ganson's ability to handpick his staff. "A school must share a common vision. In order to be effective, everyone in the school—from teachers to support staff—must work together as a team. And we've been able to accomplish that here," he says.

More than half of the teachers at McMillan have been brought in during Ganson's tenure. The staff boasts many male teachers (a rarity in elementary schools) and is reflective of the diverse ethnic and cultural backgrounds of the students. Most important, however, is the fact that the teaching staff shares a strong commitment to educating the children and serving the community.

"It's all about the children. I do everything for these kids that I would want someone to do for my children," says Ganson, who see four children attend Detroit Public Schools.

McMillan parents agree. It was that commitment that drew Donna Goines and her six children to the school.

"Mr. Ganson knows what I expect of him and I know what he expects of me as a parent. We work together to get our children the best education—me and Mr. Ganson as a team," says Goines.

She adds that Ganson is a great role model for students. "He truly cares about the kids. While other principals we've dealt with act like, 'I'm here for my paycheck.' Mr. Ganson is here for the kids. The kids are proud of him. I'm proud of him."

Ganson considers parental involvement a key ingredient for McMillan's success. Many changes in the school were designed to encourage parental participation in the children's education. The school now offers ongoing parenting and stress management classes, numerous before- and after-school activities for children and parents, and a number of field trips and programs for parents to participate in.

One day, Ganson hopes that his efforts will encourage parents to be more actively engaged in caring for and educating their children. "We can't replace parents. We can only partner with them in raising their children."

McMillan's "partner" approach has also attracted teachers to the school. Holly Koscielniak—or "Ms. K" as her students call her—is a second-grade teacher who says McMillan's approach was the major factor in her decision to come there.

"This school is very welcoming and open to parents," she says. "Parental involvement is very important. I cannot teach these kids alone. I need the support of the parents. We need to work together as a team."

Ganson has not only done amazing things inside the school, but has reached out to the community to build relationships and solicit support. Through his efforts, companies including Ford and Chrysler have donated toys for needy children at Christmas, shades for the windows in the school building, and computers. He also is hoping to establish a "multicultural corporate partnership" program that would allow some children to travel to other countries on field trips.

Principal Ganson is proud of the students, parents, school staff, and supportive community and looks forward to continuing to make the school the best possible learning environment in the area.

"Every day, when I walk out of here, I'm exhausted," he says. "But I feel good knowing I made a difference."