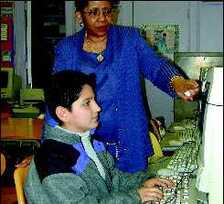 Sixth-grader Rito Bueno has gone from knowing almost no English to becoming fluent in the language while also excelling in other subjects.

Sixth-grader Rito Bueno spoke only Spanish when his family moved from Mexico to Michigan less than three years ago. But today he speaks fluent English—thanks, in many respects, to the efforts of the teachers and staff at the James B. McMillan Dual Multicultural School in Detroit.

Rito came to Michigan when his father decided it would be the best place to raise his family. Mr. Bueno worked in the United States as a teenager but returned to Mexico to get married and have children. The family then relocated to Michigan in 1998. 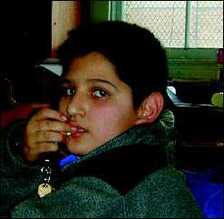 The Buenos chose, under the district's choice program, to send Rito to the McMillan school because of its bilingual instructor and the good reputation of the school in the community. Although the Buenos live closer to Beard Elementary School, Rito is more than happy to walk the nearly three miles to attend McMillan each day, if necessary. "I love my school," he says.

Rito particularly likes McMillan because of the caring teachers. "They are always willing to help me if I have trouble understanding a word," he says. "I can talk to them like a friend."

Ms. Marroquin, Rito's bilingual education teacher, considers it "a delight and privilege" to teach at a school that serves a diverse community. "As an ESL [English as a Second Language] teacher, I have the opportunity to eradicate the cultural and language barriers faced by students who speak Spanish as their first language," she says.

McMillan principal Wesley Ganson describes Rito as a dedicated student who loves to learn. "Rito is truly a joy to have as a student," he says.

Rito's favorite class is math. But he also enjoys playing the trumpet in the band with his teacher, Harold Monte.

"Rito is a very hard-working young man that is definitely not afraid of a challenge," says Monte. "He is not the kind of student that makes excuses. He makes teaching a pleasurable experience."

When Rito isn't studying, the soft-spoken 11-year-old spends his time at a local boxing club. A champion of the Silver Gloves division with a record of 11 wins and 2 losses, Rito hopes to become a professional boxer.

McMillan serves many students of Hispanic origin. This provides opportunities for all the school's children to experience a different culture. Recently, the school hosted a celebration of Mexican culture. Principal Ganson believes this is a key component of the educational process at McMillan. "It is very important for our students to understand the culture and background of their classmates," he says. "It is great for students to hear from Rito what Mexico is like and his cultural traditions."

Ganson hopes to eventually take students on a field trip to Mexico to experience the country firsthand. Until then, Ganson, his school, and Rito will continue to bring a little bit of Mexico to Detroit.