The people of Michigan do not want vouchers 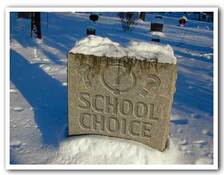 Is school choice dead in Michigan?

Is school choice dead in Michigan? Yes, it is-and supporters of church-state separation and public schools are dancing on its grave.

Perhaps that's being facetious-and a bit hasty. No political concept is ever truly dead. Like a vampire in a grade-B horror movie, bad ideas have a way of resurrecting when you least expect them. But if the discussion is about school choice in terms of vouchers, it would appear that Michigan voters are keeping a sharp stake close by, just in case.

Voucher supporters need to face some sobering facts. Proposal 1, the latest voucher referendum in Michigan, wasn't just beaten on Nov. 7, it was trounced. Michigan voters rejected the plan 69 percent to 31 percent. This happened even though voucher boosters outspent voucher opponents by a 2-1 margin. It happened despite backing from the influential Roman Catholic hierarchy and an influx of big money for glitzy television ads. It happened even though the plan was relatively modest in the sense that it would not have set up a statewide voucher program overnight (like California's also-doomed Proposition 38).

Yet Proposal 1 still lost in every Michigan county. It even lost in heavily urban Wayne County. This is significant because voucher proponents claim that minority groups are eager to get vouchers. But in Wayne County, Proposal 1 was actually defeated by a slightly higher margin than in the rest of the state.

This is the third defeat for tax aid to religious and other private schools at the Michigan ballot box since 1970. It should send a message to voucher supporters: The people of Michigan do not support vouchers. They do not want them.

This does not mean the people do not want public school reform. They do. They just don't see vouchers as serious reform. What do they want instead? National opinion polls point the way. In exit polls conducted by the Washington Post on Election Day, 78 percent of voters nationally said they prefer fixing troubled public schools, while 16 percent opted for vouchers.

An earlier Phi Delta Kappa poll found most respondents rejecting a central article of faith held by voucher proponents: That vouchers will improve education across the board by forcing schools to compete with one another. In the poll, only 19 percent thought this would happen. That same poll found that support for vouchers generally has declined over the past few years.

Polls also show that most Americans believe that troubled public schools-and it would be naïve to pretend that such institutions do not exist-should be fixed. Americans simply do not favor turning the children in these schools over to the uncertainties of the free market through voucher plans.

Americans celebrate the free market, but they are aware of its shortcomings. When it comes to education, many people believe that private schools, which are only lightly regulated by the state, may refuse admission to students who don't measure up academically. They are also aware that private schools may deny admission to or expel students based on other criteria-such as the student being the "wrong" religion, lack of sufficient involvement by the parents, crowding, or simply because the private institution wants to give the space to someone else. Americans do not want to give tax funds to institutions that discriminate. They see it as an issue of basic fairness.

Americans are also aware that public schools educate about 90 percent of our children. No private institution has shown the inclination, ability, or desire to take on this task. Private schools would rather keep doing what they do now-cherry pick their students. Most people support a private school's right to do this but believe it makes them ineligible for tax support.

Finally, the separation of church and state is crucial. To many people, this is the most compelling reason why vouchers are a bad idea. Most private schools are religious in nature. Many integrate sectarian teachings into their entire curriculum. Americans have no problem with this, but they don't necessarily want to pay for it. Religion should be funded by voluntary contributions, not by money coerced from the taxpayer by government fiat.

Is school choice dead in Michigan? There are many types of choice plans. Some may yet remain viable. But in the wake of the overwhelming defeat of Proposal 1 by the voters, politicians and voucher supporters alike need to take the hint. The people of Michigan do not support vouchers. It's time to move on to real and meaningful school reform.

Barry Lynn is executive director of Americans United for Separation of Church and State in Washington, D.C. He is an ordained minister and an attorney.