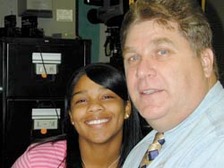 Senior Javanese Byrd is one of only eight students in teacher Dave Kabobel's broadcast journalism class. Her school's full service lab provides students with experience appearing before cameras and using lighting equipment, a soundboard and character generator, and electronic editing tools.
The alarm goes off at 6:35 a.m. It's the start of another school day for Javanese Byrd, a senior at public Arthur Hill High School in Saginaw. Most of her classmates also are getting up at the same time, but unlike them, Javanese has had only 5 1/2 hours of sleep.

There are things to be done, after all. The National Honor Society student not only maintains a 3.8 grade point average in her classeswhich include French, Astronomy, World Literature, Yearbook, and Broadcast Journalismshe also makes time for the Pep Club, Student Government, the Black Studies Club, community service, and, until recently, girls' varsity basketball.

"She's personable and outgoing, an easy-to-like kid, but basketball at this level wasn't her cup of tea" says Vonnie Killmer, Arthur Hill girls' basketball coach. "I think she'd really rather spend her time in extra-curricular activities like Student Government, where she is so gifted."

Student Government is not the only area where Javanese is gifted. Her responsibilities in putting the high school's yearbook together include the demanding and all-important task of coordinating the senior pictures. "Javanese is an upbeat girl who has the follow-through to handle a big section of our yearbook," says Patsy Procuro, a journalism teacher.

Javanese also is one of only eight students who are receiving training and daily hands-on experience with the television equipment in Arthur Hill's full-service television studio. Dave Kabobel, who teaches Arthur Hill's broadcast journalism class, oversees Javanese and his other students as they prepare and broadcast a live 8-minute show to the closed circuit TVs mounted in each of the school's classrooms. The broadcasts cover school announcements, upcoming school events, interviews with new teachers, and footage from recent athletic events.

Javanese's experience with broadcasting has made her reconsider her career aspirations. Whereas before she was interested in health services, she now wants to explore opportunities as a TV journalist. "The competition is fierce," she says, "almost like in acting. I know I'd have to start out as a news reporter at a local TV station, but I'd like to work for a network like CNN someday."

Javanese also is busy socially and off campus. Recently, she was elected to the school's Homecoming Court. And three days each week, she works in the daycare center at the nearby YMCA, where she watches and plays with the kids from 4:30 to 9 p.m. After work, she does her homework until midnight or later. On Saturdays she works with the Ivyettes, a teen group that performs community service, such as raising money for food baskets for the homeless at Thanksgiving.

What's next for Javanese? In her junior year, she applied to and was accepted at the University of North Carolina at Chapel Hill. She remains undecided about which school to attend next, but one thing she's sure of is that her time in high school has been great.

"I love Arthur Hill," she says. "If I had a chance to start all over from 9th grade I'd still come here."