Would lawmakers have to cut the budget if they lower tax rates?

The state has a balanced budget requirement, which means that reduced revenue has to be paired with lower state spending. The good news, however, is that state revenue is also growing, thanks to a growing economy. This means that lawmakers can afford to lower tax rates without having to lower spending. They can pass a tax cut and increase the state budget simultaneously, provided there is enough revenue growth. And administrators expect sufficient revenue growth.

How much would taxpayers save with this proposed tax cut?

People in a household earning the state median income of $59,600 a year would save a little more than $200 annually. Cutting the corporate income tax rate tends to increase wages and company earnings, and reduce prices, but it is unclear how much of each would happen.

While taxpayer savings would be modest, these rate cuts would improve the state business climate. This would bring more long-term benefits to people than even cutting personal income taxes.

How much would this proposal improve Michigan’s tax competitiveness?

According to the Tax Foundation, Michigan’s tax structure ranks 14th-best among the states. Under the proposal, it would improve to 11th-best. In the region, Michigan would have the best-ranked corporate income tax.

While lawmakers often talk about reducing state tax rates and often introduce bills to do so, they have not voted on such a bill since 2017. That bill proposed a small reduction in income tax rates, but it was rejected by House members 55-52. The majority of Republicans and two Democrats voted for it, while the majority of Democrats and 12 Republicans voted against it.

What are the economic effects of this proposal?

Letting people keep more of what they earn has a number of benefits. It encourages more business development and job growth over the long term. That’s because investing becomes more lucrative when governments take less income from households and businesses. A rate cut allows people to spend more of their resources on the things they want. And it makes Michigan a more attractive place to add jobs compared to its competitors. Over the short term, residents can expect the income tax reductions to generate 15,000 jobs. There would also be long-term gains, as competitiveness grows over time. Consider that Michigan creates and loses more than 800,000 jobs each year, a turnover of one out of 16 jobs every three months. Tax cuts offer all businesses an incentive to add more jobs and cut fewer jobs. 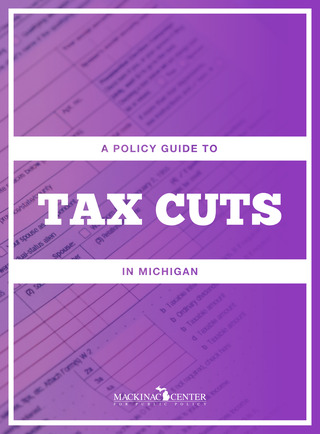