Student with 'attitude' turns things around at new school 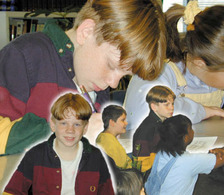 His mother's choice of North Saginaw Charter Academy in Saginaw made a world of difference for struggling fifth-grader Jeff Merchant. The first-year charter school has attracted many students with special learning and behavioral needs.

"Jeff used to be in my office so frequently that he could have had a chair named after him," says Principal Paul Fallon of North Saginaw Charter Academy.

"Yeah, I spent a lot of time in Mr. Fallon's office at the beginning of the school year," he says. In fact, Jeff was suspended from school in the first week.

Michelle Toews, Jeff's mom, remembers sending Jeff to different public schools and being in tears because nothing seemed to get him on track behaviorally. "He liked school but he had a bad attitude, refused to do his homework, and was very disrespectful."

But that was then, and this is now. In less than six months, Jeff has gone from consistent trouble to a well-behaved, focused student.

What caused this dramatic change?

"Jeff just needed a little help in redirecting his rabble-rousing energies into something more constructive," says Fallon, a Marine-turned-educator. "Children want structure in their lives. They want order. We challenge Jeff with the high expectations and structured environment he needs."

Jeff agrees with his principal. Asked what turned him around, he responds with a maturity one would expect from someone beyond his years: "There is much more discipline here."

Jeff says he is particularly motivated by an academic incentives program called "Making Waves in Education." He credits it with helping him improve both his attitude and school work. "I try harder because of the [program]," he says.

Under "Making Waves," students are recognized for their improved performance by receiving color-coded cards representing increasing levels of achievement. The better the student's color group, the more rewards are given to that group.

One day Jeff arrived at school to find donuts and juice waiting for students with Silver Cards.

"Right now I have a Silver Card, but I'm trying to get a Blue Card," he says. The Blue Card will get him off-campus for fun at a bowling alley or a skating rink with his classmates. He hopes to earn that card by the next grading period.

Jeff's enthusiasm for learning is evident. "I really like my school and my teacher, Mrs. Watson," he says.

Although his favorite subject is math, he is most proud that he has been able to improve his grades in both history and language arts.

"Mrs. Watson really helped me in spelling," he says.

According to his mother, Jeff's improved attitude has made its way home as well. "Jeff is doing his homework and he's much more respectful. I really appreciate all Mr. Fallon and Mrs. Watson have done for me and my son. North Saginaw is a wonderful school."

Everyone at North Saginaw is celebrating Jeff's achievements. Mrs. Diane Swincicki in the front office says she "got to know Jeff early in the year because of the trouble he got into. But now, he doesn't want to let me down by being sent to the office. We have developed a relationship that encourages him to do the right thing."

"Some kids respond to incentives like the 'Making Waves' program and others don't," says Mr. Fallon. "For Jeff, it has made a world of difference for him and his family."