There’s no doubt that the COVID-19 pandemic has been the primary focus of nearly every media outlet in the country these past few months. At the beginning of the crisis, the Mackinac Center continued to be a voice of sound policy by calling for immediate changes to various policies to help mitigate the impending challenges. As Michiganders put their lives and livelihoods on hold, the Mackinac Center has been looking ahead to prepare for the reopening of society.

At the start of the crisis, Mackinac Center’s Lindsay Killen teamed up with Naomi Lopez from the Goldwater Institute to call on states to repeal arcane certificate-of-need laws. These laws, found in 38 states, require hospitals to get permission from a government board to add beds or begin new treatments. As Killen and Lopez wrote in the Washington Examiner, “State lawmakers have both the authority and the duty to put patients first. They should do so by bringing urgent legislation to immediately remove certificate-of-need laws, allowing healthcare providers to fully examine how they may expand to meet new demands.” Killen also discussed certificate of need laws on the Daily Signal podcast and was quoted in The National Interest.

As the crisis throws Michigan into numerous budget debates, the Mackinac Center fiscal policy team has been a consistent voice for free-market principles. When the state entered the initial COVID-19 budget debates, a heap of pork was included. Thankfully, Gov. Gretchen Whitmer and the Legislature reprioritized spending in ways that were more valuable to Michigan taxpayers, a move that was praised by Michael LaFaive and mentioned in a Detroit News editorial. The pandemic’s effect on local pension funding was discussed in an op-ed in Bridge Magazine, co-authored by Mackinac’s James Hohman and Craig Theil of the Citizens Research Council. The Mackinac Center also published a series of items on spending cuts and other reforms, some of which were written about in MIRS News. And in a commentary published by The Hill, contributing editor John LaPlante wrote of state government efforts, “When extraordinary curtailment of freedoms are involved, transparency is key.”

It’s critical to always be looking ahead, and the Mackinac Center and Michigan Chamber of Commerce did just that when they published their document, Guiding Principles for Re-Energizing Michigan’s Economy in 2020. In addition to being delivered to every lawmaker in Lansing, the principles were also promoted in the media. An op-ed co-authored by Joseph G. Lehman and Rich Studley, president and CEO of the Michigan Chamber, appeared in both the Detroit Free Press and The Detroit News. In the piece, they focus on this theme: “Protecting the public health and safely reopening the economy are not mutually exclusive. We can do both at the same time if the state plays a proper and productive role in supporting Michigan’s economic recovery.” 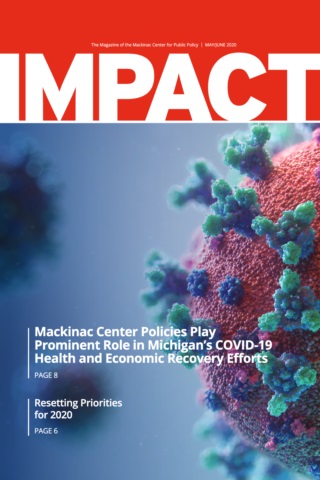