Celebrating the Miracle of Individual Liberty 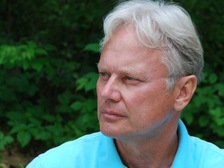 Marvin Carlson grew up in the suburbs of Detroit, where he was born in 1945. He married his high school sweetheart, Susan, and pursued his doctorate in political science at the University of Michigan. While working as an urban planner for the city of Ann Arbor, Carlson began acquiring and rehabbing run-down residential and commercial rental properties. His work has earned him several local and national awards for excellence in historic restoration.

In the 1980s, Carlson and his wife bought and restored a Victorian-era farmstead named “Sugarbush Farm,” where they raised national champion purebred Charolais beef cattle. The passing of his Great-Uncle Otto, with whom he shared a close relationship, inspired him to become a writer. Otto’s life story “personiﬁed the ‘common man’s’ challenged journey to this land of opportunity,” so in 2016, Carlson wrote and published “The Stone Circle.” He describes it as a “ﬁctionalized account of Otto’s early life in Sweden, passing from boy to man before setting out for America to fulﬁll his destiny.” The Carlsons have been married for 54 years, and they split their time between homes in Michigan and coastal South Carolina, providing Marvin the opportunity for his new pursuit, competitive small sailboat racing.

Because education is important to the Carlsons, they have supported the nationwide charter school movement from the beginning. For example, they have made a substantial ﬁnancial investment in the Savannah Classical Academy, part of the charter school initiative sponsored by Hillsdale College. The academy draws its students from the poorly served inner core of Savannah, Georgia, and teaches values like self-reliance and study discipline. Carlson says “the pernicious tyranny of low expectation is replaced by high standards of achievement at the academy. The large waiting list of parents wishing to enroll their kids who are chosen by lottery, speaks to the failure of public schools in the city of Savannah.”

I had the opportunity to speak to Carlson about why he and his wife are so active in supporting both choice in education and the Mackinac Center. He said, “The current progressive socialist movement is so corrosive to our heritage of personal liberty and economic freedom that it must be challenged and ultimately defeated. Education is key to this end. Our schools must once again teach American history and its founding in a manner that celebrates the miracle of individual liberty and its handmaiden, private property. As a teaching fellow at the University of Michigan, I taught classes in Marxist thought. In addition to [explaining] its ideological structure, I also emphasized its historical context, wherein millions of people caught in the grip of Marxist praxis were murdered and starved to achieve a ‘classless’ society. Simple exposure to the grim historic reality of socialist movements over the last 120 years will be the surest remedy to the fantasy of collective leveling currently in fashion.”