How Much Is the Right Education Worth? 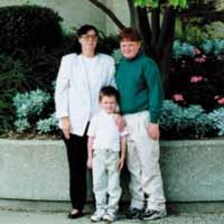 Is it worth giving up fabric softener?

"We keep cutting more and more things out of our lives," says Joanne Harwood of Grand Rapids. "Ed (my husband) gave up bowling. I didn't buy make-up. We share a newspaper with our neighbor. We were even cutting out fabric softener."

But to the Harwoods, that is precisely how much the right education for their children was worth: They did all they could to squeeze out a few more pennies in their modest household budget so that three of their six children could attend nonpublic schools.

"Other people may think that it [fabric softener] is a necessity," says Joanne. "I think that education is important."

Joanne adds that they did not know what more they could cut from the budget, but they were willing to do what it took to make sure that their children received the best education they could.

Fortunately for the Harwoods, they did not need to cut any more. They received scholarships for their children from the Education Freedom Fund (EFF).

Headquartered in Grand Rapids, EFF is a private, non-profit foundation that provides scholarships to children of low-income families so that they can attend schools of their choice. It was established in 1991 by former State Senator and current Lieutenant Governor Dick Posthumus on the premise that all parents should have the right to choose where their children go to school. In 1993, Amway President Dick DeVos and his wife, Betsy, took it over and today serve as co-chairs of the organization.

According to information supplied by EFF, the Michigan Department of Education calculates that the Harwoods are among the more than 300,000 Michigan low-income residents eligible for EFF scholarships. In 1999, EFF awarded over 4,000 scholarships. Although this figure was up 700 percent from last year's number, there remain more than 60,000 eligible applicants on the waiting list.

An average EFF scholarship is $1,000 per child for four years. Approximately two-thirds of the scholarships were awarded to residents of Detroit, Hamtramck, and Highland Park.

EFF scholarships may be used at any private school, as long as the school is legally operating. The school may be parochial, religious or independent. Scholarships may also be used, in some cases, at public schools in school districts that allow private-pay students. Students may attend schools located outside their community, including boarding schools.

For the Harwoods, their choice was a Catholic school.

"We're Catholic and feel a Catholic education is important," says Ed Harwood. "The scholarships we received for Andrew, David, and Michael have made things easier for our whole family. We feel like a prayer was answered. The scholarships made it possible for the kids to stay in the Catholic school system, and we feel the advantage of any parochial school over the public school system is enormous. The discipline and the Christian atmosphere are real benefits. This has been a real blessing for us."

The Harwoods say the fact that 97 percent of students at their children's school go on to college also helped them to make their decision. Students of the school have also received a combined total of over $2 million in collegiate scholarships.

"The school reinforces the values that we try to instill at home, and that's important," says Joanne. "We also want our children to achieve academically."

Although the Harwoods see their children's scholarships as blessings, they do not wish to keep such blessings to themselves.

"We try to give back," says Joanne. "I volunteer at school and am on the Home and School Board; Ed is on the Education Committee. We work for the citywide food drive. Even the kids also serve. They all work on the food drive, too. That's our way of giving back. Someday, when the finances are there, I would like to give."

Joanne admits that not only do the scholarships make the family's life easier now but they help build the children's futures.

"I hope they'll grow up to be good people. Hard work, honesty, God as their center. They'll have the foundation that they can go on to careers that will be high paying but I don't think money will be the most important thing to them. Hopefully they'll choose jobs that will allow them to be happy and allow others to be happy."