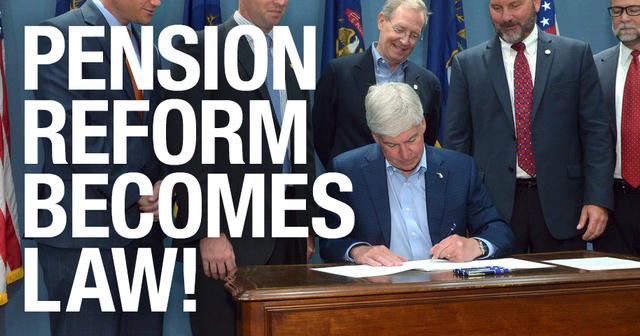 Senate Bill 401 restricts politicians and bureaucrats from adding new unfunded liabilities to the $29.1 billion already accrued by the Michigan Public School Employee Retirement System. Unfunded public pension systems are one of the greatest financial threats to governments today, jeopardizing the pensions of current and past employees and putting taxpayers on the hook for ever-rising costs. In Michigan, pension costs take up more than a third of school district payrolls, forcing layoffs and creating painful budget choices for local school boards.

“Michigan’s situation is not unique, but the legislation signed by Gov. Snyder today goes farther than any other reforms to limit the ability to promise benefits now and push the costs onto future taxpayers,” said James Hohman, director of fiscal policy at the Mackinac Center. “Some states have passed legislation that offers new employees a less generous retirement package, but this does little to stop generating new debt. Michigan’s move restrains the problem from getting worse, provides even more generous benefits to future hires and leaves the pensions of current teachers and retirees untouched.”

Under the legislation, future teachers will be offered a generous defined-contribution, 401(k)-style retirement plan or they can opt in to a defined-benefit pension. Teachers who choose the conventional pension benefit will assume half of the responsibility to ensure the pension system is properly funded. And if the plan does not remain properly funded — maintaining assets of 85 percent or higher of the required funding — it will be automatically closed to new members.

Michigan became a national leader in 1996 under Gov. John Engler when it closed the pension system for state employees and offered future state workers only defined-contribution retirement plans. The school employees system reformed in this bill cover roughly half of all government employees in Michigan.

The Mackinac Center first called for teacher pension reform in a 2006 commentary, saying, “While MPSERS reform may not seem a pressing problem today, failing to address this impending crisis will add increasing strain on education budgets, shoving aside spending on schools’ primary instructional mission.” The Center has been a leading voice calling for reform ever since, as its predictions came true and pension costs ballooned.

Leaders in the Michigan Legislature made solving this difficult problem the centerpiece of budget negotiations. This principled commitment needs to be replicated by lawmakers around the nation.

“Lawmakers should have dealt with this problem 11 years ago when the Mackinac Center first warned the system was unsustainable. They deserve credit today for showing their counterparts in others states an innovative fix,” said Mackinac Center President Joseph G. Lehman. “House Speaker Tom Leonard, Senate Majority Leader Arlan Meekhof and Gov. Rick Snyder took the long view and made the responsible choice.”