Time to Get Serious About School Employee Pension Reform 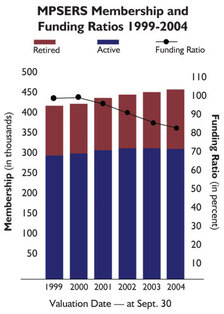 On Election Day, voters in every Michigan county decisively rejected the union-driven education spending mandate known as Proposal 5, part of which would have transferred a portion of future, unsustainable school employee pension costs from local school districts to the state general fund.

But a problem the proposal sought to address still remains: underfunded school employee pensions. Future responsibility for the underfunded promises of the Michigan Public School Employee Retirement System will continue to burden school districts, and substantive pension reform is the only way to ensure school employees’ and taxpayers’ security.

Private-sector employers are realizing defined-benefit systems like MPSERS do not serve today’s aging and mobile workforce.

MPSERS is a defined-benefit program, meaning the system promises members health insurance coverage and a set monthly pension payment upon their retirement. It is easy to get distracted by all the technical public finance and accounting language like "present value," "expected rates of return" and "life expectancies." But the concept is simple. If the fund’s assets do not equal what it promises to pay, it is "underfunded" or, more accurately, overpromised.

According to the latest MPSERS financial report, the program is 83.7 percent funded. That means that the pension fund’s assets are only 83.7 percent of what actuaries have projected it will need to pay out to retired members, which amounts to a shortfall of about $7.5 billion.

This fact would not be so onerous, if the ratio of assets to liabilities had been holding steady or increasing. But that isn’t the case. Just six years ago, MPSERS was 99.3 percent funded. The slip is due to a variety of factors, including a stock market slump, increasing numbers of retirees and too few new participants replacing the retired ones.

Strangely, reform of MPSERS has been avoided by state legislators, even though increasing burdens are weighing on school boards and administrators. Consider the schools’ perspective: This year, contributions to the pension system will likely cost school districts approximately $1,040 per student, according to a recent estimate from Michigan’s Senate Fiscal Agency. Moreover, MPSERS payments last year were estimated to have eaten up more than half of the increase in per-student state funding. The Senate Fiscal Agency projects that this year, MPSERS costs will consume almost 13 percent of districts’ tax-funded income.

To deal with these rising costs, more than one-third of Michigan school districts are laudably pursuing better management strategies by competitively contracting noninstructional services. Others are seeking reasonably priced, quality health insurance benefits. But a sound solution for the over-promised system would offer even more relief to districts.

Raising taxes when the bills come due would be a questionable policy. It would mean that the majority of Michigan taxpayers, in addition to investing for their own retirement, would be on the hook for the unfunded liabilities. Other approaches would place more of the burden on the public employees themselves: raise the retirement age, close the system to new hires or hike the contribution rate.

A better solution would be to emulate the private sector. Private-sector employers are realizing defined-benefit systems like MPSERS do not serve today’s aging and mobile workforce. Instead, many employers are transitioning to defined-contribution plans such as 401(k)s. A defined-contribution plan could help to eliminate the program’s underfunded promises and protect taxpayers from the program’s debt.

Such a program can be designed in a way that protects inexperienced investors, keeps administrative costs low and allows participants to build the largest possible retirement nest egg while reducing risk as retirement age approaches. State officials could look to the federal Thrift Savings Plan, a plan for millions of federal employees, as an example.

Michigan citizens and school employees should keep a close eye on the underfunded promises of MPSERS. While MPSERS reform may not seem a pressing problem today, failing to address this impending crisis will add increasing strain on education budgets, shoving aside spending on schools’ primary instructional mission. Now that a healthy majority of voters have rejected Proposal 5’s ominous pension funding shift, state legislators must take responsibility for reforming the school employee pension system for the good of the employees and of Michigan residents.

Ryan S. Olson is director of education policy for the Mackinac Center for Public Policy, a research and educational institute headquartered in Midland, Mich., and Matt Moore is a senior policy analyst with the National Center for Policy Analysis in Dallas. Permission to reprint in whole or in part is hereby granted, provided the authors and the Center are properly cited.