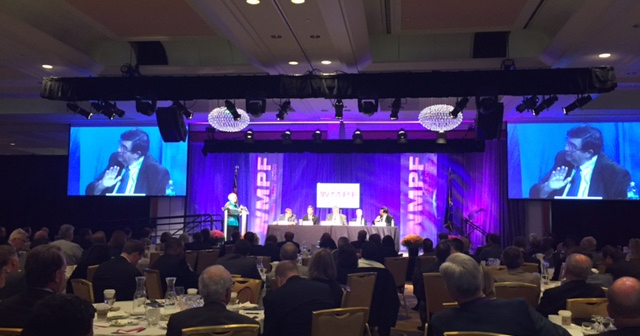 Throughout Michigan, local governments are trying to come to terms with a ticking time bomb: the underfunded plans for their employee retirement benefits. Over the years, government employers failed to set money aside to pay for these benefits and now the plans are hundreds of millions of dollars in arrears. The longer local governments fail to address the problem, the bigger the bill gets. And this problem can develop quickly.

The city of Port Huron is a good example. James Freed, the city manager who came on board two years ago, notes that in 2001 the city's pension fund was overfunded. This year, it's $150 million in the hole. For the most part, the problem came because officials failed to make adequate contributions over the years, relying too much on overly optimistic assumptions about the fund’s health.

In Norton Shores, the city's pension problems went mostly ignored until a private citizen who was also a retired financial planner started acting like the Paul Revere of fiscal doom. James Riley was startled when he read a Mackinac Center analysis showing that his seemingly stable community ranked sixth from the bottom in pension funding. Worse, the city had set aside less that 5 percent of the $38.1 million it had promised for retiree health care. Combined with pensions, those obligations exceeded $58 million.

Fortunately, some city administrators are seeing the light.

"We have to take responsibility as an organization for what we should have done differently," Grand Traverse County Executive Tom Menzel told the West Michigan Policy Forum in a panel discussion on municipal pensions.

Menzel said that the Michigan Employment Retirement System needs to change its focus from employees, which is required by statute, to employers. He says the current law conflicts with some local government charters with missions to meet the needs of taxpayers. Lawmakers may need to revisit the statute so that local government can address the needs of both taxpayers and employees.

Taking a hard look at investment assumptions is another important step. He criticized the 7.5 percent investment return assumption the system uses to project fund growth, saying it is not realistic. Closer to home, the county’s portfolio lost $491,000 last year and paid out $187,000 in investment and administrative costs to the retirement system.

"I paid them about $200,000 to lose one-half million of my principal. That cannot continue," he said.

At the same panel discussion, Port Huron's Freed pointed out the bill is taking a huge toll on government services and will only get worse. For every dollar the city pays an employee, he said, it has to pay 80 cents for fringe benefits — and more than half of that goes to paying off the city's pension liability.

"Revenue (for government) is stagnant. We have one tool and that is to cut," said Freed.

There are two steps city leaders can take quickly. First, they can close defined-benefit plans to new employees and put them in a 401(k)-style, defined-contribution plan.

He remarked that Michigan State University, a very large employer, is paying pensions for only 385 employees because it closed its defined-benefit program to new workers years ago.

The next immediate move should be to end “full-ride” retiree health care plans — which provide retirees the same level of health benefits current employees get — especially if these plans have not been funded responsibly. Unlike pensions, municipalities have no constitutional obligation to honor retiree health care benefits, which can get extremely expensive given that many government employees can retire more than a decade before Medicare subsidies start to pay for some of their care. Few local governments have set aside money for retirement health benefits. Each year, they pay this bill out of their general fund, the same fund that pays for public safety, parks and infrastructure.

"This is a piñata I'd be willing to swing at all day," said Freed. He added that 30 percent of Port Huron employees have contracts written years ago that say they will get exactly the same health care as retirees as they did when they were employed.

Some municipal governments have gotten in front of the problem by offering retirees a stipend for health care and having them shop for their own plans. Another option is to restrict the age at which retirees can start collecting retiree health care benefits if they retire before they are eligible for Medicare.

Union contracts could be a challenge for city reformers, but governments could pave the way by starting to cut benefits for nonunion workers. When union contracts come up for renewal, union negotiators will be hard pressed to say no when other staff members have said yes. Ditto if the issue goes to court.

State legislators can do their part to embolden local governments to fix the problem. They can pass legislation that could set limits on the multipliers used to calculate pension benefits and eliminate cost-of-living adjustments. State lawmakers could also ban so-called pension spiking arrangements in which employees exploit overtime pay provisions to boost salaries right before retirement.

"State regulation is needed because it is hard for local politicians not to cave to employee demands. Just take it off the negotiating table," said Freed.

Two other solutions, selling bonds to pay off the liabilities or raising local taxes, are nonstarters for municipal managers, like Freed.

"It is very difficult to go back to the people and ask for more money because we couldn't manage our house. We need to talk about reform and restructure. We are competing with other states. No one will come here with high taxes," said Freed.

"Grand Traverse County attracts many retirees. If we have to move to an emergency manager, our brand will be negatively impacted. People will leave and they won't move here," he said.

As local governments can attest, spreading the debt out over the future is no longer a sensible strategy. The future is here, and these issues need to be addressed now.