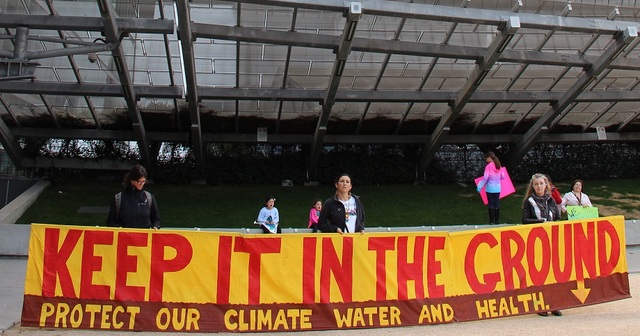 It is getting more crisp and cool in the morning. In Michigan, we’re getting back into the habit of scraping the frost off our windows before we get in the car and head to work. We’re also remembering the location of the thermostat in our homes so we can take the chill off the morning temperatures.

For most people, that heat, which we expect from our furnace, is brought to us courtesy of natural gas or propane, both of which are transported through pipelines that crisscross this continent. As the cold deepens and we move into winter, having the ability to simply flip a switch or push a button to heat our homes not only improves our daily lives, it literally saves lives.

But the actions of self-styled climate activists would keep that essential energy — and the warmth and security it provides — from Michigan residents. Working around their rallying cry of “keep it in the ground,” a few of these activists are so convinced that we must stop using these fuels that they are willing to forcibly block access to them for Michigan residents. They are moving beyond peaceful protest and political involvement to what they call “direct action” — an increasingly in-your-face style of protest that often involves threats or the actual destruction of industrial equipment and access structures. “Direct action” replaces negotiation when special interest groups want to compel an immediate change in policy.

These protest groups defend their actions, claiming that time is too short, the issue is too important, or that they have exhausted all other political and protest options. Their statements assert that their only recourse is to “step outside polite conversation,” and use direct action to “shut it down.” While they will typically stress that their actions are meant to be nonviolent, in the case of one recent climate-related direct action, the potential for danger, or catastrophic results, grew exponentially.

On Oct. 11, a group of climate activists calling themselves Climate Direct Action spread themselves across the country in Washington, Montana, North Dakota and Minnesota. The groups, each made up of one activist and one supporter, forced their way through security fencing at pipeline facilities belonging to Enbridge, TransCanada, Kinder Morgan and Spectra Energy. After filming statements justifying their actions, they cut the chains and locks protecting pipeline safety valves and turned off the flow of oil.

Other, better-known, environmental groups applauded the efforts. In one statement, Greenpeace Energy Campaign Director Kelly Mitchell even went so far as to threaten further action. “Greenpeace supports the brave activists who peacefully shut down all 5 tar sands pipelines into the US. ... If our leaders won’t take action to protect people and the planet, the climate movement is willing and able.”

Enbridge officials responded by first recognizing the rights of people to comment on energy issues. However, they drew a line at what they called “pipeline tampering incidents.” Enbridge spokesperson Jason Manshum described the group’s “attempt to tamper with energy infrastructure” as “reckless and dangerous,” noting the possibility for a pipeline failure or explosion as a result of the tampering.

“The groups involved in this ... claim to be protecting the environment, but they do the opposite and put the safety of people at risk — including themselves, first responders and neighboring communities and landowners.” Manshum went on to say that Enbridge would “support the prosecution of all those involved.”

The actions of Climate Direct Action against two Enbridge pipelines — Line 4 and Line 67 — hold direct significance for Michigan residents. Both pipelines run from Alberta, Canada southeast to Superior, Wisconsin. Line 5, the pipeline that supplies Michigan with 540,000 barrels per day of light crude oil for refineries and natural gas liquids (in many cases, propane) begins in Superior. If the oil flows to Superior were successfully stopped, the oil and propane flowing through Line 5 could also stop.

What the “shut it down” forces don’t tell Michiganders is that Line 5 provides the Upper Peninsula with 65 percent of the propane its residents use to heat their homes and cook their food. It also provides 55 percent of the propane used statewide. The approaching winter paints, in stark colors, the vital reality that we need a reliable, affordable source of energy to heat our homes and places of work. We must recognize there are risks associated with the transportation and use of gas and oil. But their benefits — reliable and affordable electricity, transportation and heating fuels, to name just a few — far outweigh those risks.

It is one thing to speak out about potential risk, to peacefully take part in the political process, and to work to make changes in energy and environmental policy. It is another thing entirely to deliberately endanger lives and communities because you refuse to wait for your worldview to be implemented. The direct actions of groups like Climate Direct Action damage the integrity of the political process that we rely on to set reasonable energy policies. Their actions against energy infrastructure also make the risks associated with the use of oil and natural gas far worse for both people and the environment.