An Opening for Michigan Licensing Reform

When the state asks for higher fees, repeal the mandates 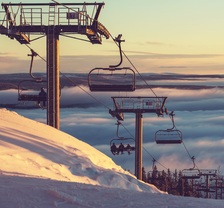 Ski areas cost more to regulate than they paid in licensing fees in Michigan.

A recent MIRS report, “State Collects 32% More In Fees Than It Cost to Regulate,” notes that the state brings in $147 million in revenue for licenses and permits. But the total cost to regulate Michigan’s variety of industries was much probably much higher.

The Michigan Department of Licensing and Regulatory Affairs, or LARA, is in charge of overseeing the occupations state law requires to be licensed. In theory, the fees collected for an occupation should pay the cost of regulating that occupation but that rarely works out in practice.

According to MIRS, the state gained $25.5 million in revenue from fees from stockbroker and investment firms, but spent only $4.5 million regulating them. It brought in $46,880 from carnivals and amusement rides, but spent $390,401 overseeing them. Ski areas paid $15,676 in fees while costing the state $339,552 to regulate. Many professions subsidize other occupations or within their own departments.

Last year, Michigan’s licensing apparatus collected a total of $54.3 million in fees while spending only $37 million. So, on the whole, the nearly 200 occupations licensed by the state are paying more than in fees than what it costs the state to regulate these industries. This gives credence to the notion that part of the state’s interest in regulating occupations is simply to generate revenue.

For regulating occupations that are not paying for themselves, the head of LARA blamed fee structures that are decades old and set in statute, and there is a point to that. The department plans to go to the Legislature and ask for some of these fees to be raised.

But before policy makers agree to increase fees, they should consider other options. First, the state should try to limit how much some occupation’s licensing fees subsidize the cost of regulating other occupations. The state collects a lot of revenue in fees from building contractors and nurses — but these professionals should not be paying the cost to oversee landscape architects and barbers.

More importantly, legislators should eliminate licensing requirements for occupations that do not have a clear connection to public safety concerns. This will eliminate costs for LARA and, according to empirical evidence, likely give the economy a boost by reducing the costs of individuals entering the labor market.

Unless requiring an occupational license can be proven to benefit public health and safety, the state should not bother with creating a regulatory scheme for an occupation. Too many of Michigan’s licenses do not meet this standard.