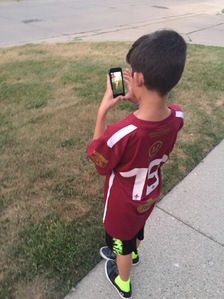 In 2010, First Lady Michelle Obama used a White House press release to announce a massive public-private-nonprofit campaign with “an ambitious national goal of solving the challenge of childhood obesity within a generation so that children born today will reach adulthood at a healthy weight.” It took on childhood nutrition, exercise and much more. The resulting initiative is often known by its “Let’s Move” website name.

Last week, the Pokémon Go mobile game launched. It encourages users to venture out into the real world to find and collect imaginary cartoon monsters at specific geographic points. Gamers then send their pets into virtual arenas to battle against other players’ Pokémon collections for bragging rights or in-game control of a particular location.

Both Mrs. Obama and Pokémon are trying to get our kids off the couch and out of the house. Unsurprisingly, the fun cartoon creatures motivated by profit for their developers seem to be doing a better job at it than the well-intentioned First Lady, whose elliptical trainers and stationary exercise bikes at the White House Easter Egg Roll and whole-grain pizza crusts in school cafeterias have left schoolchildren mostly unimpressed.

A friend of mine recently called Pokémon “imaginary murder pets,” which may be my new favorite phrase. While I’ve been told by my colleague James Hohman that Pokémon are actually knocked unconscious rather than killed when they lose a battle, the fact remains that these little gladiators are popular at a historic level: Within a week of its launch, Pokémon Go became the most successful mobile game ever in the United States with an estimated 21 million daily active users playing the game for an average of more than a half hour every day.

Apart from its popularity, what makes Pokémon Go different from most other video games is that it incentivizes its players to walk around outside, in the “real world.” It does this not only by hiding Pokémon throughout neighborhoods that show up superimposed on a phone camera’s view of the world and designating other neighborhood locations as sites for Pokémon battles, but also by giving players the ability to purchase “incubators” for “eggs” that hatch powerful Pokémon if the user walks between two and 10 kilometers while playing the game. The more incubators the player purchases with real-world money, the more eggs they can hatch at a time while they walk.

While players looking down at their phones and creating pedestrian traffic jams, not being aware of safety issues in their surroundings or playing the game in inappropriate locations have made headlines, the real news is that a game is getting 21 million Americans to walk around for a half-hour a day.

While the outcomes of the “Let’s Move” program are debatable, it certainly never got 15 percent of Americans to start a daily exercise program in the same week.

While I don’t play Pokémon Go, I do have personal experience with this phenomenon. My 11-year-old son normally approaches the idea of going for a walk with his father with the excitement otherwise reserved for visits to the orthodontist. But when I offered to walk with him around the neighborhood while he caught Pokémon, we ended up taking almost a two-mile walk together on a beautiful summer evening. It wasn’t LetsMove.gov or Fatherhood.gov or any other government program that got us out there, but the promise of those little digital monsters.

We don’t know whether the popularity of Pokémon Go will hold up, and we don’t know what the newfound willingness of Americans to bring their video gaming out onto the streets will spark from the creativity of other game developers. (Personally, I wonder what happens when someone starts moving first-person shooter games like the Call of Duty or Battlefield series outside and we have running digital battles through the streets.)

Regardless, what we do know is that, if history’s a guide, whatever’s “next” will likely have far more power to improve our lives than the most well-funded, well-meaning and well-thought-out government programs. Millions of Americans finally got moving in response to a video game that entertains but also encourages initiative, persistence and creativity. It’s an important reminder of the power and promise of a free and civil society, but also the limits of the inherently top-down government approach to social problems.

When Will Gov. Whitmer Relinquish Unilateral Control of Michigan Society?