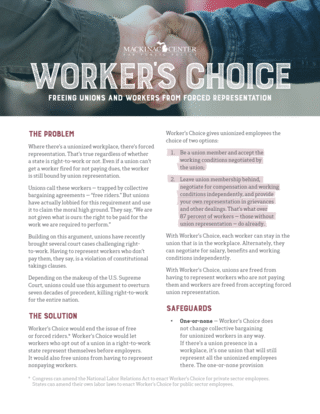 Where there’s a unionized workplace, there’s forced representation. That’s true regardless of whether a state is right-to-work or not. Even if a union can’t get a worker fired for not paying dues, the worker is still bound by union representation.

Unions call these workers — trapped by collective bargaining agreements — “free riders.” But unions have actually lobbied for this requirement and use it to claim the moral high ground. They say, “We are not given what is ours: the right to be paid for the work we are required to perform.”

Building on this argument, unions have recently brought several court cases challenging right-to-work. Having to represent workers who don’t pay them, they say, is a violation of constitutional takings clauses.

Depending on the makeup of the U.S. Supreme Court, unions could use this argument to overturn seven decades of precedent, killing right-to-work for the entire nation.

With Worker’s Choice, each worker can stay in the union that is in the workplace. Alternately, they can negotiate for salary, benefits and working conditions independently.