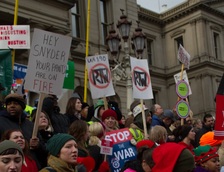 A May 10 election in West Virginia could leave the state’s new right-to-work law in peril. On that day, voters will decide whether to re-elect Republican Justice Brent Benjamin to the West Virginia Supreme Court of Appeals, or replace him, possibly with union-supported Darrell McGraw.

McGraw, who is seen as leading the pack of those challenging the 12-term justice, is endorsed almost entirely by unions. If elected, he would be the fourth Democrat on the five-member court.

The main concern of those who favor giving workers the freedom to choose whether or not they have to pay a union to keep their job is that with McGraw on the bench, the West Virginia Supreme Court may have the majority it needs to issue a ruling similar to the one recently made by a Wisconsin judge striking down the state’s right-to-work protections.

As I explained in National Review:

Dane County judge William Foust ruled that under the law, “a free-rider problem is born — the ability of nonmembers to refuse to pay for services unions are compelled to provide by law.” He then sided with the three unions in the case, including the Wisconsin State AFL-CIO, that argued that the right-to-work law took their property without just compensation.

The ruling is incorrect and will almost certainly be overruled.

While Wisconsin’s ruling came from a lower court and will likely be overturned by a higher court, the West Virginia Supreme Court of Appeals would be the final arbiter in a question regarding that state’s new right-to-work law. If that court says it violates federal law, the case could go to the U.S. Supreme Court. If McGraw is elected and assists in overruling worker protections, workers’ only recourse (assuming the case involves a federal issue) is to take the question to the Supreme Court, which has been in limbo since the February death of Justice Antonin Scalia.

The current 4-4 split means the U.S. Supreme Court may fail to uphold nearly seven decades of precedent and kill right-to-work in West Virginia. If there is a tie — as was seen in the most recent union case before the court, Friedrichs v. California Teachers Association — the lower, unfavorable West Virginia ruling would stand. Such a ruling would not set a precedent for future cases or impact other states’ right-to-work protections.

If President Obama’s nominee Merrick Garland is appointed, there may be a 5-4 majority in favor of forced unionism. As the Washington Times recently wrote, “Garland rulings consistently side with labor unions.”

A court with Garland, or an appointee like him, could conceivably strike down right-to-work for the entire country.

As a former Supreme Court of Appeals justice and former attorney general, McGraw benefits from better name ID than most of the other candidates on the ballot.

The former state Supreme Court justice and former attorney general is among five candidates vying for the single seat on the five-member court. McGraw, because of his long political career, likely enjoys the highest name recognition in the field that includes current Justice Brent Benjamin, Wayne King, Beth Walker and Bill Wooten.

Kercheval also notes that, “Additionally, it is a plurality vote, meaning the winner does not have to have a majority, just more votes than anyone else.” Because there are five candidates “theoretically, just over 20 percent of the vote would be enough to win the election. … Voter turnout in West Virginia in the last presidential primary (2012) was only 24 percent, just over 292,000 votes. If turnout for this year’s primary is similar, 60,000 votes could be enough to win.”

However, it’s worth noting that Benjamin has already defeated a McGraw once, in the 2004 Supreme Court race when he unseated Darrell’s younger brother, Warren, 382,036 to 334,301. Also, Walker received 329,395 in the 2008 Supreme Court race, coming in third in the race for two seats behind Democrats Menis Ketchum and Margaret Workman.

Will unions have a majority on the West Virginia Court?

According to a 2015 study from West Virginia Citizens Against Lawsuit Abuse, a nonprofit citizen watchdog group that fights lawsuit abuse, two of the justices, Democrat Robin Davis and Democrat Margaret Workman, joined together 68 percent of the time on non-unanimous decisions.

Still, there is hope. Only Davis dissented on a procedural issue during the right-to-work fight that would have killed the chances of the bill. The question was whether the governor had to appoint a Republican or a Democrat to fill a seat vacated by a Republican who had been elected as a Democrat. Workman wrote the majority opinion stating a Republican had to be appointed.

Workman was joined by Democrat Chief Justice Menis Ketchum and Republican Justice Allen Loughry; Benjamin did not participate in the decision due to a conflict of interest.

If McGraw is elected, it would take only one justice siding with a likely Davis vote against right-to-work, to make worker freedom in West Virginia history.

Worse, if Merrick Garland or someone of similar persuasion is appointed to the U.S. Supreme Court, the outlook for right-to-work across the country could be in jeopardy.